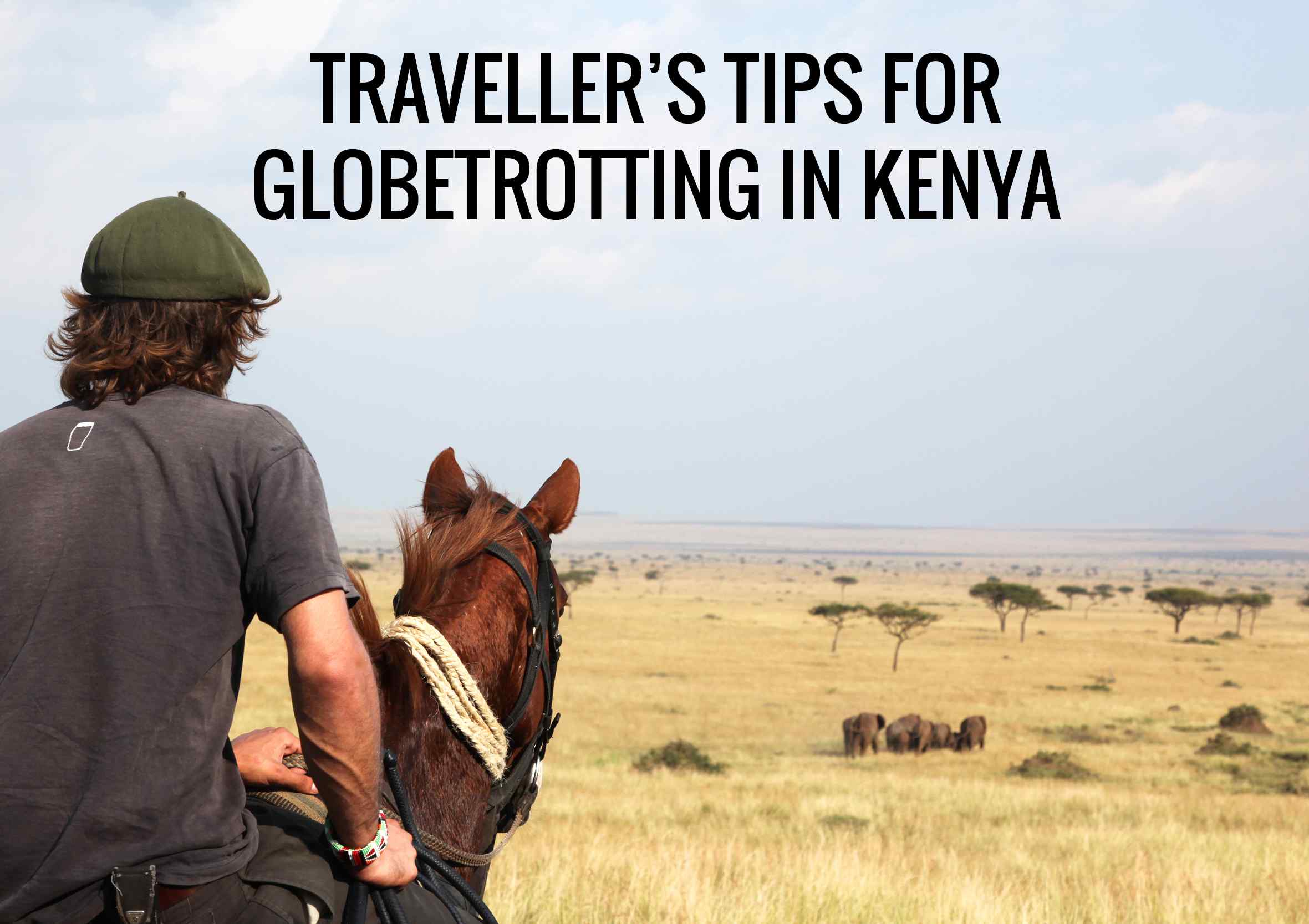 For those brave hearts who are planning a riding safari in Kenya, we’ve put together some general information that is a must-read before you board your flight.

Although Kenya lies along the equator, the climate and temperatures vary according to the altitude and the distance from the sea. Along the coast, the climate is tropical (hot and humid), except in the months of July and August, which are cold and less humid. Inland, the days are generally hot and sunny, with limited humidity. On the higher plateaux, the nights can be quite cold, especially during the cloudy months of July and August. The long rains are from end of March to end of May, and the short ones from mid-November to mid-December. Sunny periods alternate with short rainy ones during the rainy seasons.

Australian visitors must be in possession of a passport and entry visa, which should be valid throughout their stay in Kenya. Guests that plan attend can apply for their visa in Australia before visiting Kenya or guests can receive their tourism visas on arrival into Kenya. The visa applicant requires a valid passport with sufficient number of unused pages for endorsements abroad. The passport must be signed and valid for at least six months. Its $48 for a single entry.

Visitors are advised to get medical cover with a company that provides medical assistance. In the event of an accident or illness while on safari, these companies will airlift the visitor to hospitals in Nairobi (with the prior agreement of local doctors who provide the initial medical care). Click here to read a blog post on travel insurance for horse riding holidays.

The electricity supply is 220/240 volts/50 Hz. Electric sockets are three-pin square (British-type). Visitors are advised to ensure that their electric appliances such as shavers and battery chargers for video cameras operating on different voltage have in-built adapters.

It is advisable to travel with a small medical kit that includes any basic remedies you may need, such as antacids, painkillers, anti-histamines and cold remedies. You will also need anti-diarrhoeal medication such as Imodium; and oral rehydration sachets such as Electrolytes. Also include first aid items such as Band-Aids, antiseptic and dressings. It may be worth asking your doctor to prescribe a broad spectrum antibiotic, suitable for treating dysentery or severe infections. Take along scissors, tweezers, and thermometer, lip salve, sun block, water purification tablets or drops, as well as your preferred brands of toiletries and cosmetics. If you wear spectacles or contact lenses, take spares. Also take a torch and a pocket knife.

Vaccines commonly recommended for travellers to Africa include those against;

* Certificate required for entry into, or travel between, some African countries. Several of these vaccines require more than one dose, or take time to become effective. It is always best to seek advice on immunisation well in advance, if possible around 6 weeks before departure. If you have visited Kenya in the last six days prior to your date of return to Australia, Australian Customs officials will ask you to present a valid Yellow Fever Vaccination Certificate on entry into Australia.

Malaria is a disease spread by mosquitoes that bite mainly at dusk and at night. Every traveller to Africa needs reliable, up to date advice on the risks at his or her own destination. Prevention consists of using effective protection against bites, plus taking anti-malarial medication. The most suitable choice of medication depends on many individual factors, and travellers need careful, professional advice about the advantages and disadvantages of each option.

Whatever your choice, you must take an anti malarial drug if you are visiting a malarial region, and you must continue taking the drug for the necessary period after your return; you must also take precautions to reduce the number of insect bites. Visitors to malarial areas are at much greater risk than local people and long term expatriates – from malaria as from several other diseases: do not change or discontinue your malaria medication other than on skilled professional advice. Travellers to very remote places should also consider taking stand-by malaria treatment, for use in an emergency.

A departure airport tax (currently $40) is charged at Kenyan airports. The tax can be paid in Kenya Shillings or foreign currency.

There are no foreign exchange restrictions in Kenya. Major international credit cards (Visa, Access, Amex, Diners, etc) are accepted in most places. The use of Travelers Cheques in dollars or other currencies is advised.

Kenya is bestowed with well over 40 different ethnic groups with different languages and dialects, traditional arts and crafts, architecture in homestead designs, clothing and jewellery, food, social and economic activities. Successive migrations and invasions, right until the British colonisation in the late 19th Century, have left their mark in the rich mixture of tribes, race and customs seen in Kenya today. If any one thing of Kenya speaks of this unique character, it is the modern melding of traditional societies and culture. Kenya’s culture is both diversified and fragmented, born of myriad sources and influences both new and old.

In Kenya the modern and the traditional live side by side, and at times the lines blur. For many visitors to Kenya, this is evident within minutes of arrival. In Kenya it is possible to leave Nairobi, a city with a thriving business heart powered by the latest information technology, and drive in just a few hours to a place where life is lived in accordance to tradition and custom, where warriors armed with spears drive cattle into thorn brush enclosures to protect them from lions at night.

The Kenyan official national language is English, which is widely spoken, as well as the national language Swahili. Both Languages are taught throughout the country. Swahili is the most widely spoken African language, with 50 million speakers in East Africa and Central Africa, particularly in Tanzania (including Zanzibar) and Kenya.

There are many other tribal languages spoken by each Kenya’s 42 different ethnic groups,including Kikuyu, Luhya, Kalenjin, Luo and Kikamba and many more The average Kenyan therefore speaks atleast three different languages.

A more modern language spoken amongst the younger members of society is Sheng. This is a mixture of Swahili and English along with a words of other languages.

nzuri – good asante sana – thank you very much hapana – no

If you would like more language phrases, email me.

Kenyan food includes a variety of African and Indian recipes. Ugali (porridge made from cornmeal or millet flour), groundnut soup, stews and kebabs are favourite dishes. Use of spices and coconut feature in Kenyan cuisine. Indian food such as pilau rice, samosas and chapatis are often eaten with meals. Tea is served very hot and sweet.

The Constitution of Kenya guarantees freedom of worship and there are hundreds of religious denominations and sects in the country. The followers of Christian faith are the majority, with 40% being Protestant and 30% Roman Catholic. Islam is the main religion for most of the communities along the coast and the Somali community. The Asian community is mainly Hindu. Some Kenyans observe traditional methods of worship.

Songs and dance have always played an important role in African culture, used especially to mark important events and ceremonies. For example, the Maasai had the Engilakinoto, sung after a victorious lion hunt. Structured around a deep rhythmic chant it is accompanied by a spectacular dance in which warriors display their strength and prowess by leaping directly and vertically into the air.

The Luhya of Western Kenya developed a very distinctive dance style called Sikuti after the local name for a drum. This extremely energetic dance is usually performed by paired male and female dancers, and accompanied by several drums, bells, long horns and whistles.

The Kamba and Chuka people both developed a distinctive drumming style, in which a long drum is leant forward and clasped between the thighs. The Kamba were well known for their athletic, almost acrobatic dancing.

I Dreamed of Africa by Kuki Gallmann

The Rain Queen by Katherine Scholes

Blood Sisters, A Durable Fire, In Borrowed Light by Barbara and Stephanie Keating

Out of Africa starring Meryl Streep and Harrison Ford