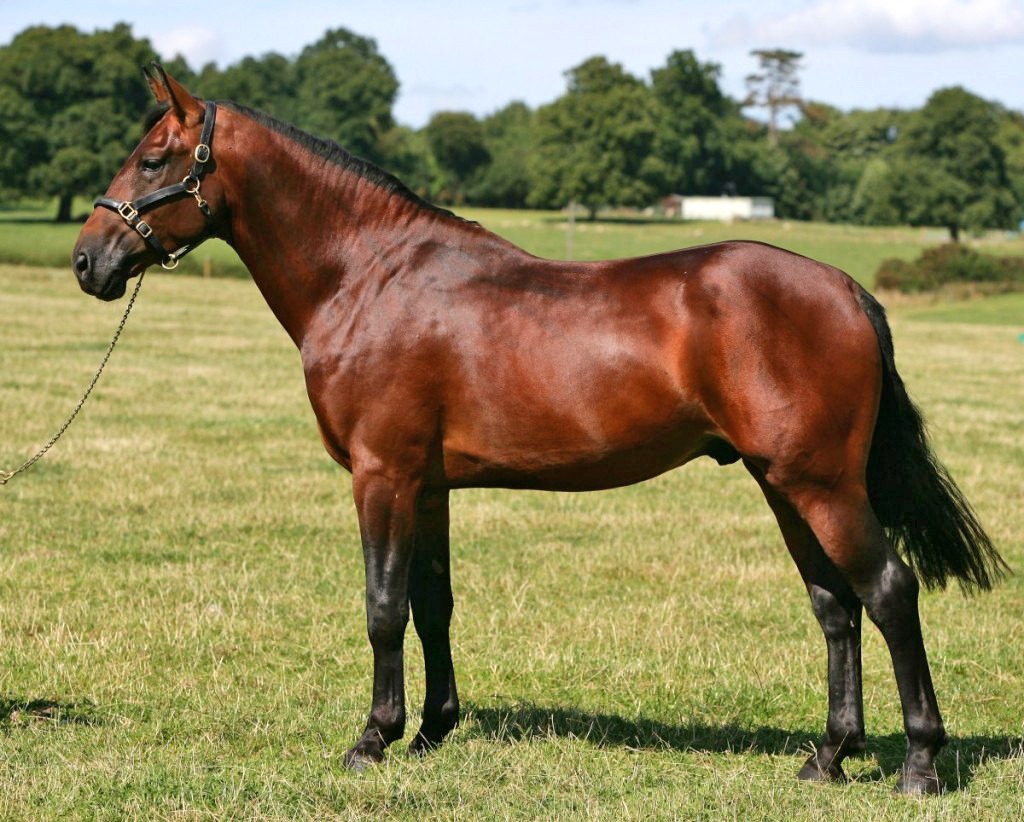 Breed origin: The Cleveland Bay is England’s oldest breed of horse, although the Cleveland Bay Horse Society and studbook was not formed until 1884. It is also the last remaining pure breed of warmblood! The origins of the Cleveland Bay predate any written records of its existence, but it is known that in the Middle Ages, its ancestors were native in Yorkshire. They were a clean-legged breed, always bay in colour, and were often used for transporting goods between monasteries and abbeys, since monks were the primary breeders of horses. The packmen and traders of the era were known as chapmen, and their horses were given the name Chapman. Later, the name Cleveland Bay was coined thanks to their colouring and their association with the Cleveland District within Yorkshire.

Over the centuries, the Cleveland Bay became all the more versatile: it pulled the first carts and wagons, ploughed the land, took families to church, went hunting and enabled long-distance travel. The Chapman horse was forever altered by the introduction of Barb and Andalusian stallions brought home by officers returning from war in the 1640s. This infusion of ‘hotblood’ lent great speed and refinement to the breed, which then became known as the Yorkshire Coach Horse. This elegant and practical horse became extremely popular among the aristocracy not only in England, but across Europe, and was exported far and wide in pairs and teams. It also influenced a large number of European warmbloods, most notably the Oldenburg and the Groningen, as well as various heavy breeds.

However, the days of the coach horse were numbered, and the automobile, tractor and railway very rapidly made the Cleveland Bay (and many other large breeds) redundant. By the 1880s, the breed was on the verge of extinction. At this point, a number of breeders formed the Cleveland Bay Horse Society to preserve the breed; and although numbers continued to decline, the purity of the Cleveland Bay has been assured since that day. Cleveland Bay horses were used as cavalry mounts from the late 19th to the early 20th century, but this also meant that many of them died on the battlefield; and although a renaissance in coach driving in the US resulted in a burst of demand, there were very few Cleveland Bays in existence by the end of World War II. Fortunately, in the 1960s, Queen Elizabeth II bought a Cleveland Bay colt and made him available to the public as a sire, increasing the breed’s popularity a hundredfold almost overnight. A huge range of mares were crossed with this sire, Mulgrave Supreme, and his offspring proved successful in almost every imaginable discipline. Since then, while numbers have fluctuated, the future of the breed has been more or less assured by its astounding versatility and soundness. There are around 900 purebred Cleveland Bays in the world at the moment, with many more part-bred horses registered within their section of the studbook, too.

Distinguishing features: The Cleveland Bay has outstanding substance, activity, stamina and strength, with a willing and sensible temperament to boot. It is courageous and intelligent, yet docile. The breed’s ancient and pure lineage means that it always breeds true to type, imparting its best characteristics onto the next generation without fail, and without any of the genetic shortcomings sometimes found in younger breeds. As their name suggests, Cleveland Bays are always bay in colour, with black points and no white markings (although a very small star on the head is permissible). They typically stand around 16-16.3 hands high and have a dignified, powerful appearance. Their action is straight, free and long-striding, their legs clean, muscular and hard with good flat bone. They have a wide, deep body, with muscular shoulders, back and loins and a long neck. Their hindquarters are long, level and powerful, with a well-set tail. Their head is relatively large, as are their ears and eyes, the latter being characteristically gentle and expressive. Last but not least, Cleveland Bays have extremely dense, tough hooves, which are blue in colour (underneath). This is part of the reason they are so sound and untiring.

Modern day Cleveland Bay: Cleveland Bays are incredibly versatile horses and have found great success as hunters, dressage mounts, eventers and show jumpers, among other disciplines. They are also still used for driving and farm work in some areas – and as royal carriage horses! Part bred Cleveland Bays have proven themselves excellent sport horses and can be seen in high-level competitions all over the world.