Breed origin: The Sandalwood pony developed on the Indonesian islands of Sumba and Sumbawa. It is named after the Sandalwood tree, which was once of the island’s major exports. Not much is known about the history of the Sandalwood breed, but it is believed that Arabians and Barbs had a strong influence on their bloodlines, making them one of the fastest and finest of the eight horse breeds native to Indonesia. The Sandalwood pony has been exported to many other Southeast Asian nations to be used for racing. It has also played a role in shaping some of Australia’s pony breeds.

Distinguishing features: Sandalwood ponies are fast, hardy and robust, with great stamina.  They have a handsome head with small ears, a short and muscular neck leading to a deep chest, a long back, and a sloping shoulder and croup. Their legs are thin but strong, and their hooves are tough and well-shaped. Sandalwood ponies usually stand 12 to 13 hands high and can be any colour.

You can take one of these horses for a spin on our Sumba Ride in Indonesia! And click here to meet Covo, a Sumba Sandalwood crossbreed, one of the guest horses on this ride! 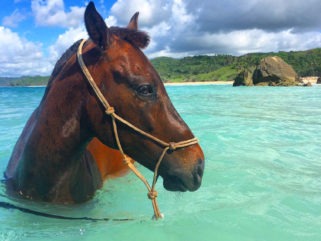 Sumba is a Globetrotting destination that has our hearts racing with excitement! Its thrilling, wild and colourful horse culture will leave you bug-eyed and gasping for more.

Available all year round (subject to accommodation availability), with varying seasonal rates.