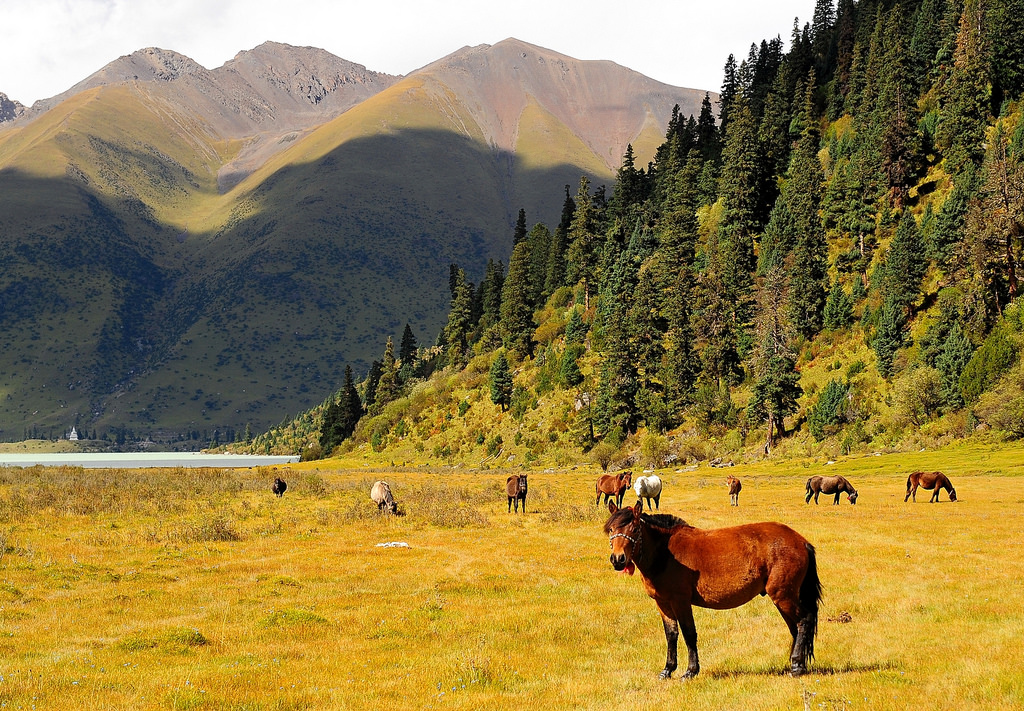 Breed origin: The Tibetan pony is an ancient breed that possibly descended from the Mongolian Pony and various Chinese breeds. The remains of Tibetan Ponies dating back 4,000 years have been found in the eastern part of the Tibet Autonomous Region. There are several types of Tibetan pony which some people assert to be distinct breeds in and of themselves. However, they all share a great many characteristics, most notably incredible endurance. The Tibetan pony is the only breed that can survive in the Qinghai-Tibet plateau region, having been selectively bred to cope with the extreme conditions of the plateau for thousands of years. Even crossbreeds struggle to survive, and this has ensured the breed’s continued purity despite a few attempts to introduce new bloodlines.
Tibetan ponies are held in high esteem by the people of Tibet and have traditionally been kept by people of all social  ranks, as well as the Dalai Lama and other religious figures. Over several dynasties, they were sent as tributes to Chinese Emperors, and until the 1950s they were traded for tea. This trade was so prolific that the route between Lhasa in Tibet and the Chinese province of Sichuan became known as the Tea-Horse Road.

Distinguishing features: Although they stand only around 12-12.2 hands high, Tibetan ponies have exceptional strength and stamina. They are extremely sure-footed and resilient, capable of living and working at incredibly high altitudes. Tibetan ponies have a small head with a pronounced jaw line, a straight profile, wide nostrils and small ears and eyes. Their body is compact with a straight back and shoulders, flat withers and powerful hindquarters. They have a short, muscular neck, a deep chest and short, straight legs.
Each type of Tibetan pony has adaptations that make it uniquely suited to its environment and the needs of the local people. The Nangchen type is a little taller than other Tibetan ponies, with excellent speed and agility. It is the most common horse used in Tibetan horse races. The Riwoche type resembles prehistoric horses: dun-coloured with primitive markings and an upright mane. Other types include the Ganzhi (considered to be the direct line of the original mountain stock), the Yushu and the Zhongdian.