A timeless wetland checkered with silver salt pans, waterlogged rice paddies and movie-style cowboys: nothing excites us more than galloping the free-spirited, silver Camargue horses through their native habitat.

Dramatically beautiful and historically famous for its wild white horses, the Camargue is a region located southern France that is home to one of the oldest living horse breeds in the world. It’s here in this rugged, marshy delta that you’ll discover first-hand the region’s passions and traditions astride a ghostly-white Camargue horse. You’ll be the honourable guests of the Bon family, farmers to their very core, and you’ll ride alongside Frédéric to learn the traditional ways of ‘Le Gard’, the riders who work the black-as-coal native Camargue bulls.

To be honest, globetrotters, this experience is a game-changer. The Camargue horse is said to have lived in the Camargue marshes and wetlands for thousands of years and has long-standing historical ties to the local community, where families have worked with the breed for generations. With their characteristic grey colouring and love of salt water, the white horses of Camargue offer a Globetrotting experience like no other. The cowboys who domesticate and work with them are known as Le Gardians. While they truly are ‘guardians’ of these creatures and their homeland, these cowboys are not named for their role – rather, they take their name from the plains to the north known as Le Gard. These modern-day cowboys use the Camargue horses to herd the Camargue bulls and cattle, who also happen to love the salty seawater.

Now let’s linger on the off-the-horse comforts. You’ll be staying in the Bons’ 17th century family farmhouse, now transformed into an elegant, luxury hotel where you’ll feast on French delicacies for breakfast, lunch and dinner – YUM! Culture seeps out of every pore of this holiday to make your time in the Camargue unique and unforgettable.

PLEASE NOTE: solo globetrotters will be required to pay the single rider rate if we do not have another guest willing to share.

WHAT IS INCLUDED IN THE PRICE?
The price includes all accommodation, riding, and meals from first day dinner through to breakfast on the final morning.

WHAT IS NOT INCLUDED IN THE PRICE?
The price does not include international or regional flights, travel insurance (compulsory), all beverages at dinner including alcohol, tea and coffee, transfers to and from the estate, and staff gratuities.

WHY IS THE PRICE QUOTED IN EUR?
With our riding destinations, the currency is dictated by our ride partner in that country. Therefore due to fluctuating exchange rates we have to quote in the same currency.

*Please note, this is a suggested itinerary only and subject to change at the discretion of your guides due to weather and other influencing factors. 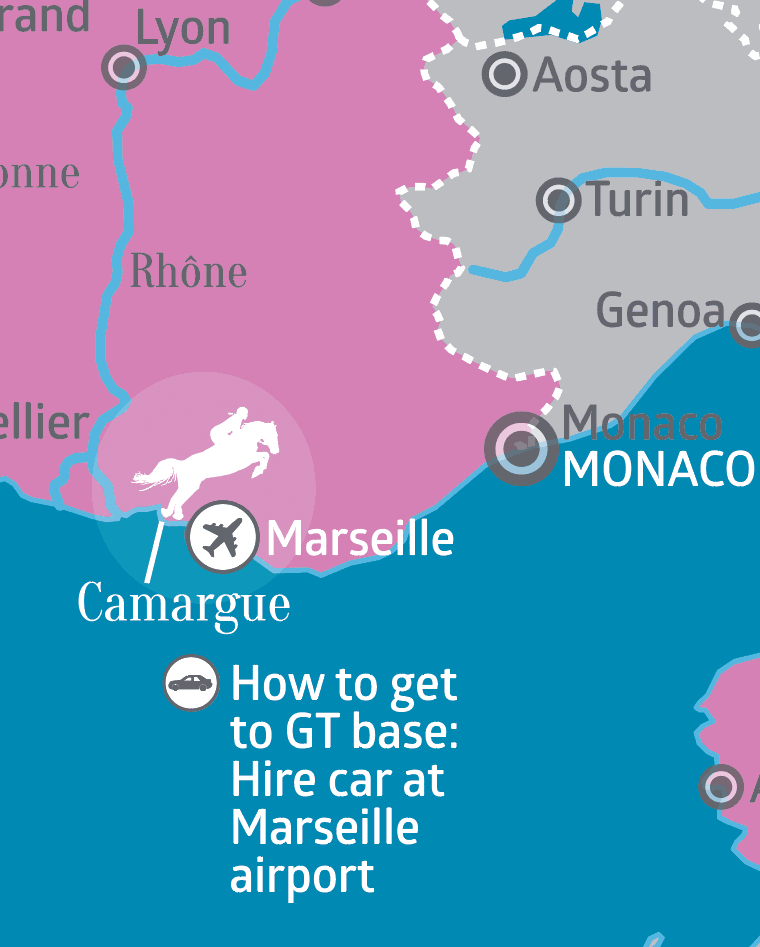 What our valued Globetrotters say about the Camargue Ride

‘The Camargue Ride was AMAZING!! The hotel on site was much nicer than the pictures (I was expecting the opposite) – our room was split-level, cozy yet modern, and immaculate! The food was amazing and great care was taken to address my dietary restrictions. Most importantly, the white horses of the Camargue were AWESOME – surefooted no matter the weather, fearless and willing. We galloped through fields and on beaches and even helped herd some young bulls. Thank you so much, Kate and Laura! My sister and I cannot wait to do another Globetrotting trip.’ 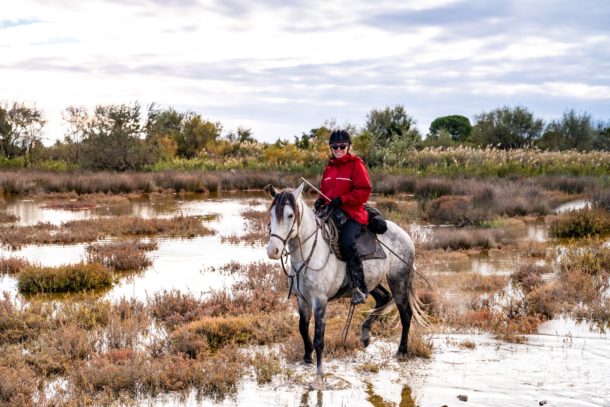 ‘The Camargue Ride surpassed every one of my expectations. For me, it was the unique, wild quality of the environment, the amazing Camargue horses and the superb accommodation that made this ride an absolute standout. My measure is always, ‘Would I go back?’ and my answer to this one is, ‘In a heartbeat’.’ 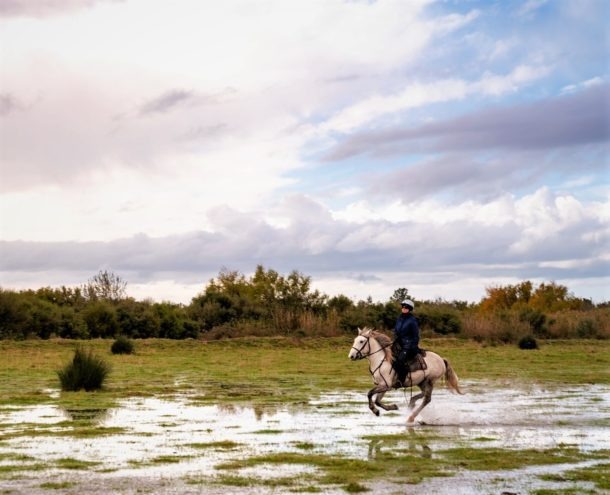 ‘The Camargue Ride was one of the best Globetrotting rides I have ever been on!!! Whilst it may have partly been our lovely hosts, the delicious food, the stunning location and the luxurious 5 star accommodation, the Camargue horses are legendary for a reason. Phenomenal agility, speed and cattle sense combined with brave and intelligent personalities make these horses the true stars of the ride. Be it racing along the beach or chasing after the famous black bulls, the armchair-like Camargue saddles and trusty Camargue horses will give you an experience you will never forget. My little pocket rocket, Trés, and the Camargue will hold a special place in my heart forever.’ 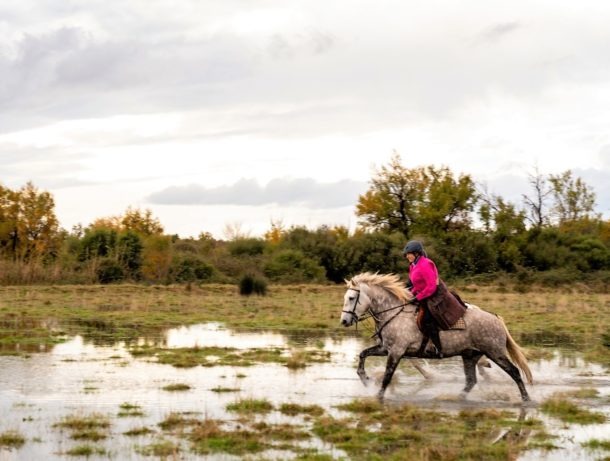 ‘The Camargue ride was a wonderful sisters’ holiday for us! It was our first horseback holiday, and we can’t wait for our next. The horses were wonderful – surefooted, willing and responsive, and experiencing the Camargue horse culture was a treasure. The riding was varied and exciting, from beach rides to helping to work the cattle. The beach ride on the second day was especially beautiful with flamingo, heron, breaking waves, beach gallops and that lovely picnic in the pine woods. And oh… the food! It was so fun to experience it with the Camargue crew. We are hooked!
Reliving the memories until the next adventure. Thank you, Globetrotting family!’ 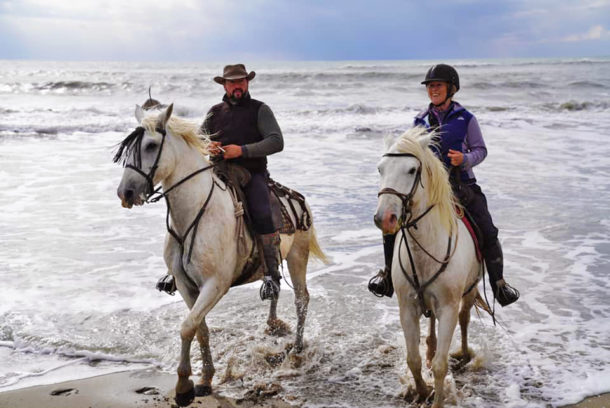 ‘I loved this ride! We had a ball on sturdy, strong and responsive grey Camargue horses who galloped over all terrain – along wild and remote beaches, over muddy saltbushes, with rain in our faces and feeling oh so alive! The bulls were small and black but also fast, so watching the Gardians at work with them was great. The accommodation, food, service, and fellow riders just made this a fabulous cultural and historical experience. One of those rides I will remember forever.’