So you’ve booked yourself a spot on the Scottish Borders Ride, or perhaps the Thirlestane Castle Ride. I’m so excited for you! Scotland is going to knock your tartan socks off! And while you’re there, it’s quite likely you’ll be wanting to spend some time in Edinburgh. There’s way more to see and do than we could ever hope to list here, but cast your eyes over this wee blog post for some highlights to include in your visit to this most historic and beautiful city.

From the airport, you can cab it to the city for £20. The trip takes around 20 minutes. Airport buses run every 15 minutes and take 30 minutes to reach the city centre. A one-way ticket will set you back £4.50.

Edinburgh Castle and the Royal Mile – Be warned, you and every other tourist in Scotland wants to see the castle on the hill, so expect crowds. That said, you really can’t visit Edinburgh without a trip to this icon of Scottish history. Take the scenic route to get there by meandering up the Mile, and keep an eye out for The Elephant House on George IV Bridge to your left – it’s the café where J.K. Rowling began writing the Harry Potter series (spoiler: Rowling has great taste in cafés!). 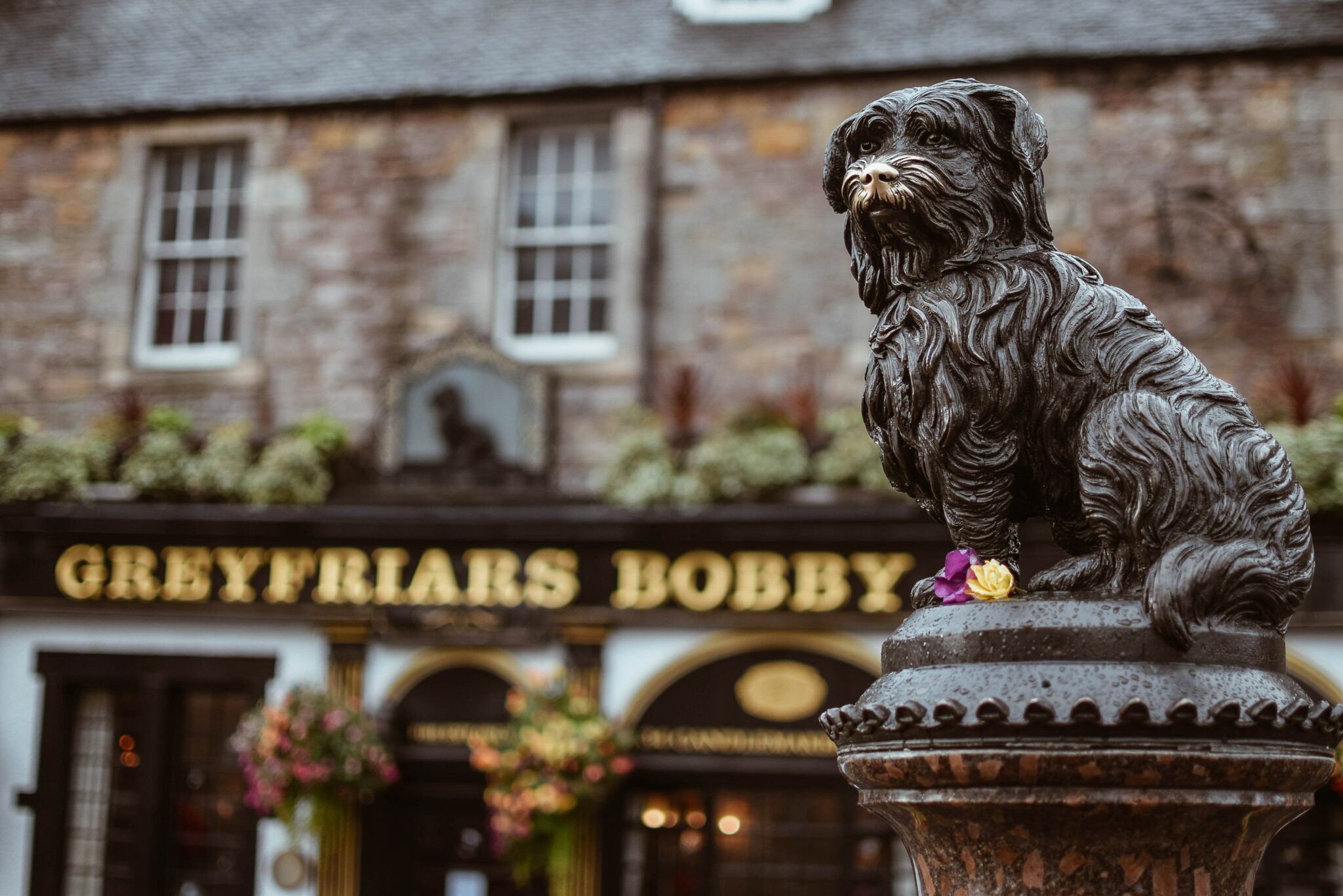 Greyfriars Bobby – The legend of one loyal little dog lives on with the statue of Greyfriars Bobby, a Skye Terrier who followed the coffin of his master to the graveyard and refused to leave. Located at the south end of Candlemaker’s row, the statue stands outside Greyfriars Church and the city’s oldest graveyard.

Holyrood Park, the Salisbury Crags, and Arthur’s Seat
Conveniently located right on the edge of central Edinburgh is a rugged, open parkland where you can wander to your heart’s content and still soak up a dose of Scottish history. Holyrood Park is home to Holyrood Palace, Queen Elizabeth’s official Edinburgh residence and home to previous monarchy dating back to Bonnie Prince Charlie. The palace is open to the public when the Queen and other officials are not in residence.

Inside the park you’ll also find walking tracks leading to the striking cliffs of the Salisbury Crags and Arthur’s Seat (pictured below), the highest point over Edinburgh and the best place to bask in spectacular 360-degree views across the city and beyond.

Holyrood Park is also home to the ruins of the medieval St Anthony’s chapel and ancient cultivation terraces that will give you an insight into Scotland’s ancient farming practices. 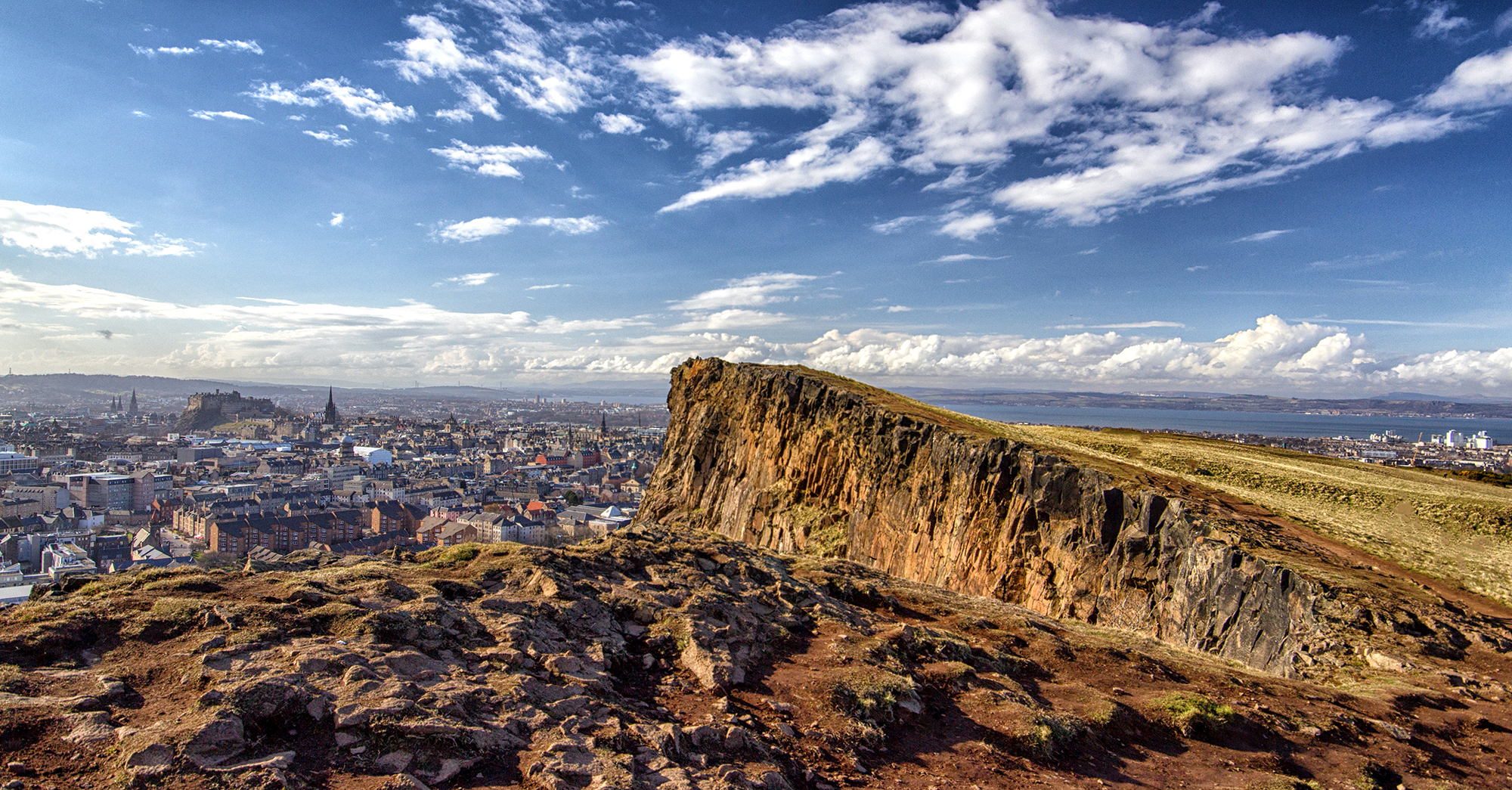 For a truly Scottish atmosphere, The Fiddlers Arms not only serves a modern twist on traditional local pub food, but if you stay on after 9pm, you’ll be treated to some lively Scottish music that’s bound to get your toes tapping. Perhaps a round of ceilidh dancing? Go on, you know you want to!

If you’re into cheap and cheerful eats, you can escape the tourists and dine with the locals at Filmhouse.  It’s an art cinema café with loads of character and a great option if you happen to have specific dietary requirements. They offer a simple menu with tasty, quality food, and, if you feel so inclined, there’s the option to catch an indie film while you’re there.

For an upmarket dining experience with relatively reasonable prices, try Angels with Bagpipes. Located on the iconic Royal Mile, this one ticks all the boxes for atmosphere, location and fresh seasonal Scottish ingredients.

The Bonham Hotel is a traditional 4-star hotel located in the heart of Edinburgh, with views overlooking the castle. It has an onsite restaurant and bar and is close to the town centre, with rooms featuring Victorian décor and leather furnishings.

Or for a more personal experience at an affordable rate, try The Royal Scots Club. It’s close to the action, but far enough away so as not to be too noisy. It’s a private club, but non-members are welcome. The Scots Club prides itself on offering guests sumptuous accommodation in a relaxed, friendly atmosphere.

This article was written by Bernadette Kelly, a loyal Globetrotter since 2010, with 16 rides under her belt spanning Africa, South America, Iceland, Europe, The UK, and Australia.