On this itinerary you’ll have the unique privilege to ride in the Common Ridings – the oldest horse riding festival in the world. You’ll be mounted on a nifty Irish Sport Horse and ride shoulder-to-shoulder with Scottish lads and lassies, tailored in tweed, bursting with good cheer, happy to share a time-honoured tradition.

Now let me just segue into some Scottish history here. The Common Ridings are an annual event celebrated in Scottish Border towns from May through to September. The tradition of Common Riding dates back to the 13th and 14th centuries, during the continual border wars with both England and other clans, when local men risked their lives to protect their town and people from invasion. Long after they ceased to be essential, the Ridings continued in commemoration of local legend, history and tradition. With that said, YOU get to ride in a Common Riding as part of The Scottish Borders Ride. WHOOP!

And when you’re not on a Common Riding, your days will see you trit-trotting across grassy glens, moorlands dotted in sheep and unspoiled coastlines. The dramatic scenery will pull you back in time to a bygone world of clan clashes and romantic tales of damsels in distress.

You’ll be guests at Cringletie House Hotel, which is hands-down amazing, bespoke yet homely. Throughout the week, you’ll be hosted by general manager, Will Haegeland, who will charm you with his Scottish knowledge and hospitality. And let’s not forget the out-of-saddle delights like a wee dram (whisky) beside a crackling fire after a successful Common Riding; the tingle on the back of your neck when ‘Scotland the Brave’ skirls on the pipes at your welcome dinner; and the afternoon when you trade your riding pants for a tartan kilt to try your hand at Highland Games.

It’s a brilliant balance of riding paired with free time to explore the Borders’ historical highlights. *This is why this ride is PERFECT for non-riding partners.

Once you’ve completed The Scottish Borders Ride you’ll qualify as an honorary Scot, having stepped out on a Common Riding, tossed a shot-put in a kilt, slugged a single-malt whisky and appreciated some fine pipe music. Scottish ancestry or not, Outlander fan or not, you need to make a beeline for this ride.

PLEASE NOTE: Only advanced riders can take part in the May departure dates due to the pace and distance of the Common Rides.

**You will be required to pay the single supplement rate should we not have another guest willing to twin share with you.**

WHAT IS INCLUDED IN THE PRICE?
The price includes all riding, twin share accommodation, meals (from first day dinner through to breakfast on the last day) and Common Ride fees.

WHAT IS NOT INCLUDED IN THE PRICE?
The price does not include international flights, travel insurance (compulsory), all transfers, alcohol and dinner on one night of the itinerary (a high tea is included during the afternoon on that particular day).

WHY IS THE PRICE QUOTED IN GBP?
With our riding destinations, the currency is dictated by our ride partner in that country. Therefore due to fluctuating exchange rates we have to quote in the same currency.

Please note, this is a suggested itinerary only and subject to change at the discretion of your guides due to weather and other influencing factors.

The set dates and starting times of the Common Ride days are subject to vary, depending on the location of the event. Rest assured, you’ll enjoy two Common Rides throughout your itinerary (with the exception of the September departure, which will only include one). 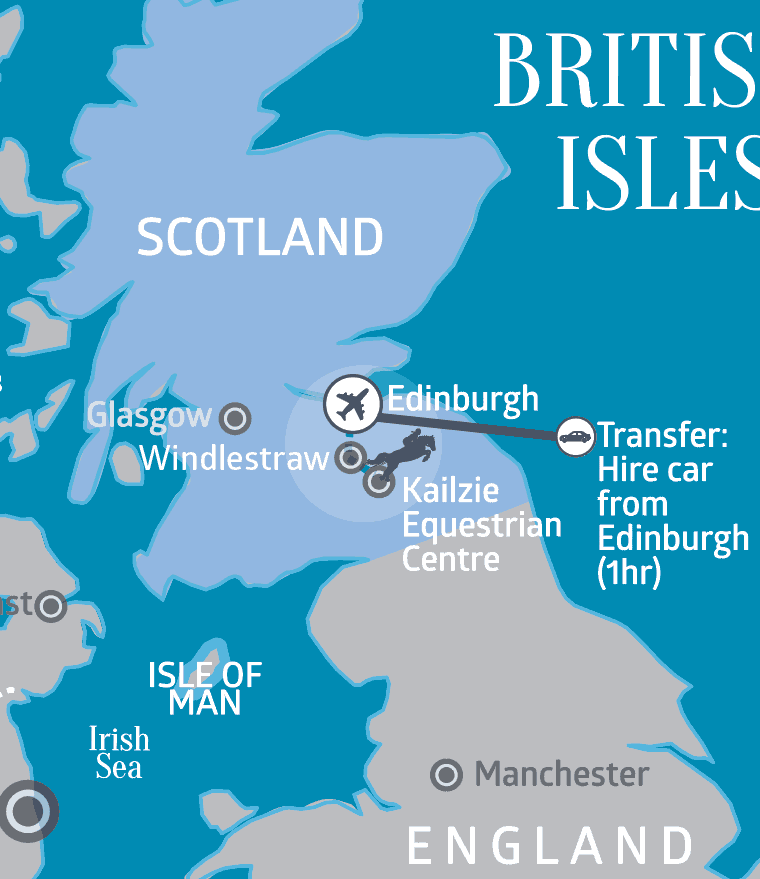 What our valued Globetrotters say about The Scottish Borders Ride 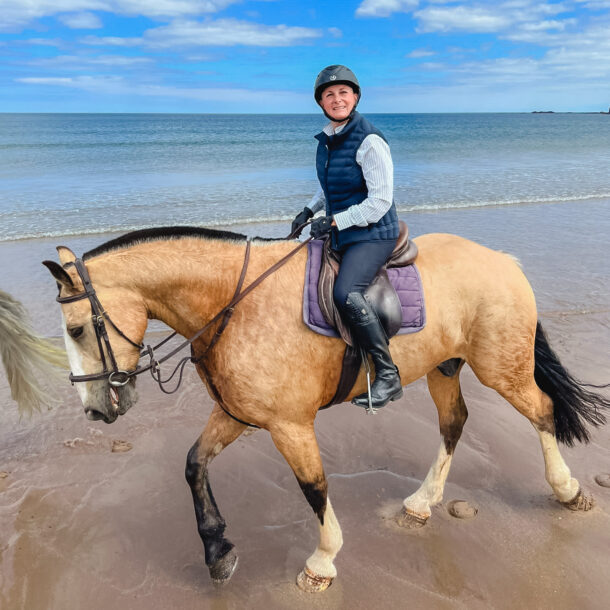 ‘The Scottish Borders Ride changed my life. I cannot wait to do again, it was what dreams are made of and by far the best vacation I have ever experienced! Every single item and event was perfect. On a scale of 1-10, I can easily say 45! I had the pleasure of riding 5 different horses and each one was spectacular. They were beautiful, kind, fit and so much fun to ride! The Cringletie House accommodations were 5 star and the staff and service were exceptional. The meals were absolutely delicious, each one better than the last. Many times I had to pinch myself and wipe away tears of joy while galloping across the beautiful countryside, crossing creeks, cantering up hills, waving to the townsfolk on the Common Ridings and yelling ‘Hip Hip Hooray!’ These are memories I will treasure for the rest of my life!’ 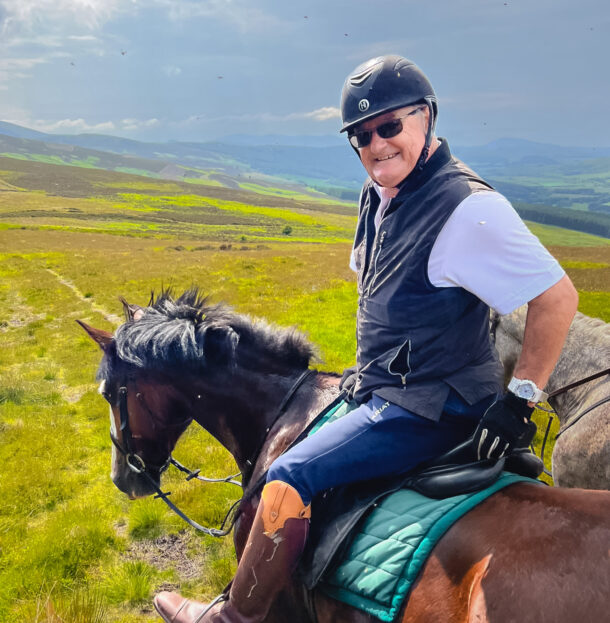 ‘OVERPROMOTED and OVERDELIVERED! That does not happen often with a trip of any sorts, but Globetrotting did just that. From the preparation suggestions and what we could expect, to the accommodations at Cringletie Hotel, to the horses we rode and the itinerary with softer rides in between the Common Ridings, it was a 25 on a scale from 1 to 10! Be prepared, Globetrotting, we’re coming back. And sooner than you think!’ 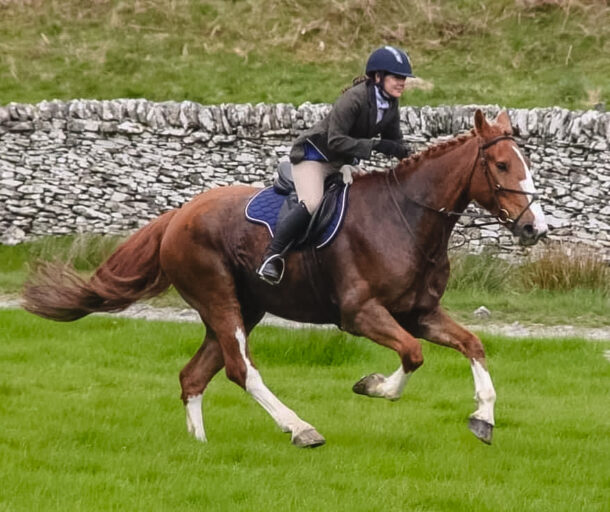 ‘The Common Ridings are unique in my experience. Never before when riding through town streets have I been cheered by hundreds of people packing the pavements, or, on reaching the summit of an uphill gallop, been greeted by friendly strangers waiting to hand out cold beers! The riding itself is exhilarating and the landscape beautiful, but it’s the feeling of being included and welcomed into a genuine community tradition that makes it special. Kingston carried me on both Common Ridings, staying confident and surefooted over grass, stone and bog, up and downhill and across ditches. Suzy’s advice was not to think too hard and trust the horse. I would trust Kingston to do my taxes – he knows his job inside out!’ 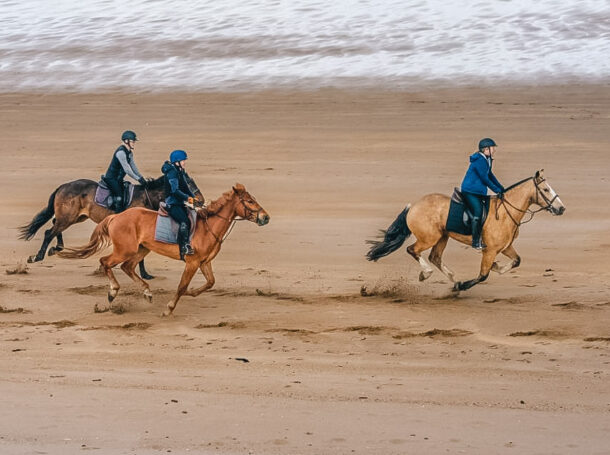 ‘A holiday to remember forever. A combination of adventures riding in beautiful Scottish scenery with lovely Scottish people including you in their community traditions. Adonis and Costa were both super horses, very willing and eager to please. The guides, Gemma and Suzy, are gold. They are very professional and tell you everything you want to know. The Common Ridings are an adventure that can’t be compared to anything else. The second Common Riding was the most superb because we knew our horses better and had more of an idea of what to expect. The weather changed with every hill we took – really Scottish. I loved the contact with the local people and their friendliness. I loved everything!’ 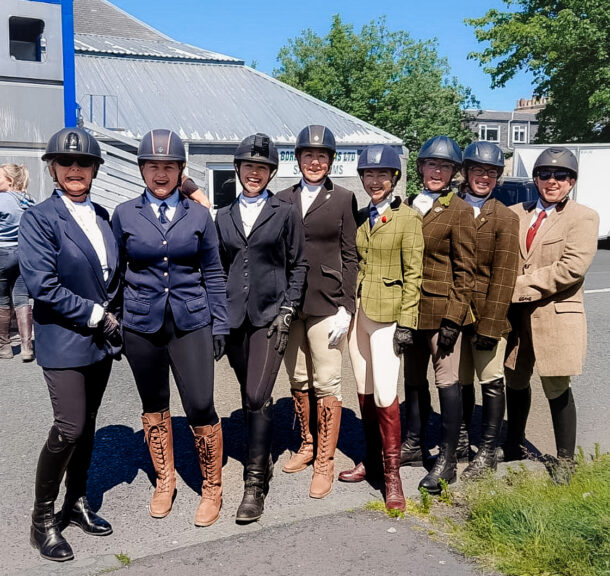 ‘This Globetrotting experience has changed my life! After waiting two years due to Covid, the breathtaking scenery, hospitable people, and amazing horses took my breath away in more ways than one. The Scottish Common Ridings are like nothing else, and I feel honored to have been part of such an old tradition! I rode Yannis, Rambo, Skye, Rocco and Dakota and I was completely blown away by them all. They knew exactly what to do and the way they navigated the terrain was unbelievable. The entire trip was incredible. Seeing Scotland on horseback is the best way to do it!’ 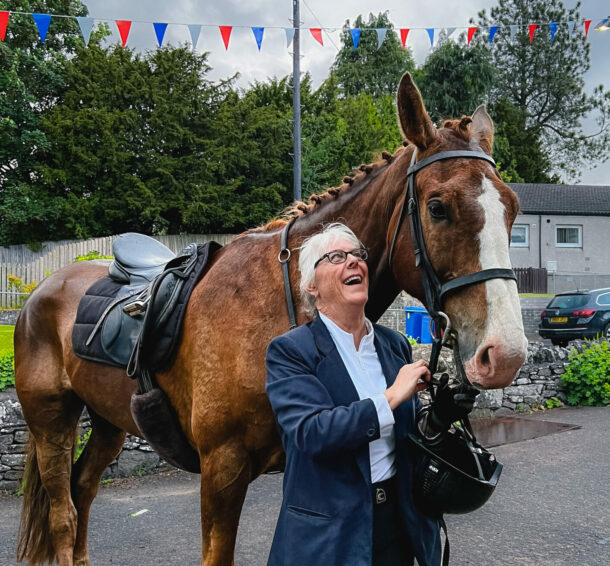 ‘This was the most amazing trip! Our guides, Gemma and Helen, were fun and informative. The staff at Cringletie were courteous and efficient and the food was amazing. The actual riding was totally different from anything I’ve ever experienced in my life. The Hawick Common Riding was a day I will never forget – so awesome! The horses were exceptional. I rode Adonis most of the time. He was a big teddy bear and took amazingly good care of me on the Common Ridings. I also rode Sebastian, who I loved. For everyone who made this trip possible, a GREAT big hug and thank you so much!’ 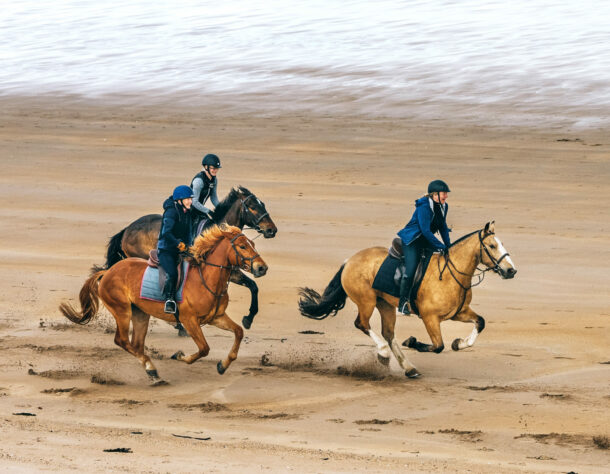 ‘I’ve never done a holiday without my own horse before. I was so impressed with the quality of the horses and the care and attention given to them. Susy and her team really care about them and the standards are extremely high – the horses come first, which is what was important to me. I rode Bruno, who was incredibly well mannered and looked after me every step of the way. The riding was unforgettable. It challenged me, but was incredibly exhilarating. The beach ride was the best ride of my life – I will never top that!’ 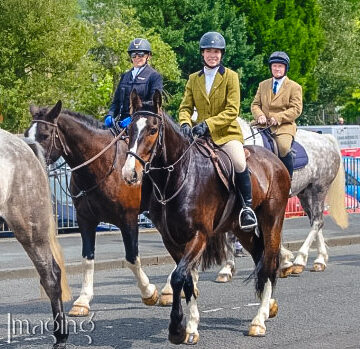 ‘Susy and Gemma are amazing horse women and professionals, and both very kind and funny! Our first Common Riding was my favorite day. At dinner the night before, Gemma warned us this was going to be the fastest riding we had ever done. Although I have lots of experience going fast (such as wild horses across the Mongolian steppe), I still had the pre-horse show jitters. We started riding through the town with thousands of people cheering us off with a ‘HAYYeee’ and my horse Cosmo was excited, but steady as can be. Anytime we stopped to wait, he would quiver with excitement but not put a foot wrong. It was clear he knew what was about to happen and he was excited for it, which put me at ease. On our first bolt up the hill, as he leapt over ditches with total grace, I knew this was going to be a FANTASTIC day! The quality of the horses on this ride was top notch and this was truly a horse experience, not just a vacation with horses.’ 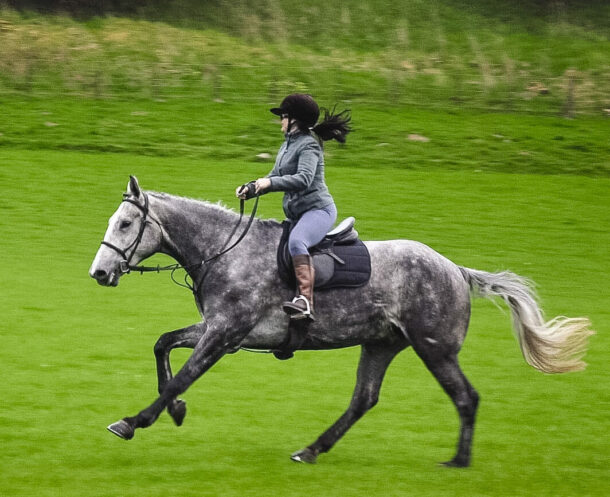 ‘This was a trip of a lifetime, and Scotland has to be one of the most beautiful places on Earth! The horses were utterly amazing. My favourite was Wallace – he was so intelligent! He knew exactly what he was doing, and he took excellent care of me. The accommodations were incredible! Our hosts were so lovely and accommodating and our guides were very knowledgeable. The first Common Riding was fantastic because it was all so new, and the second Common Riding was even better, because we knew what was coming and got to enjoy things even more. I can’t wait to book my next trip!’