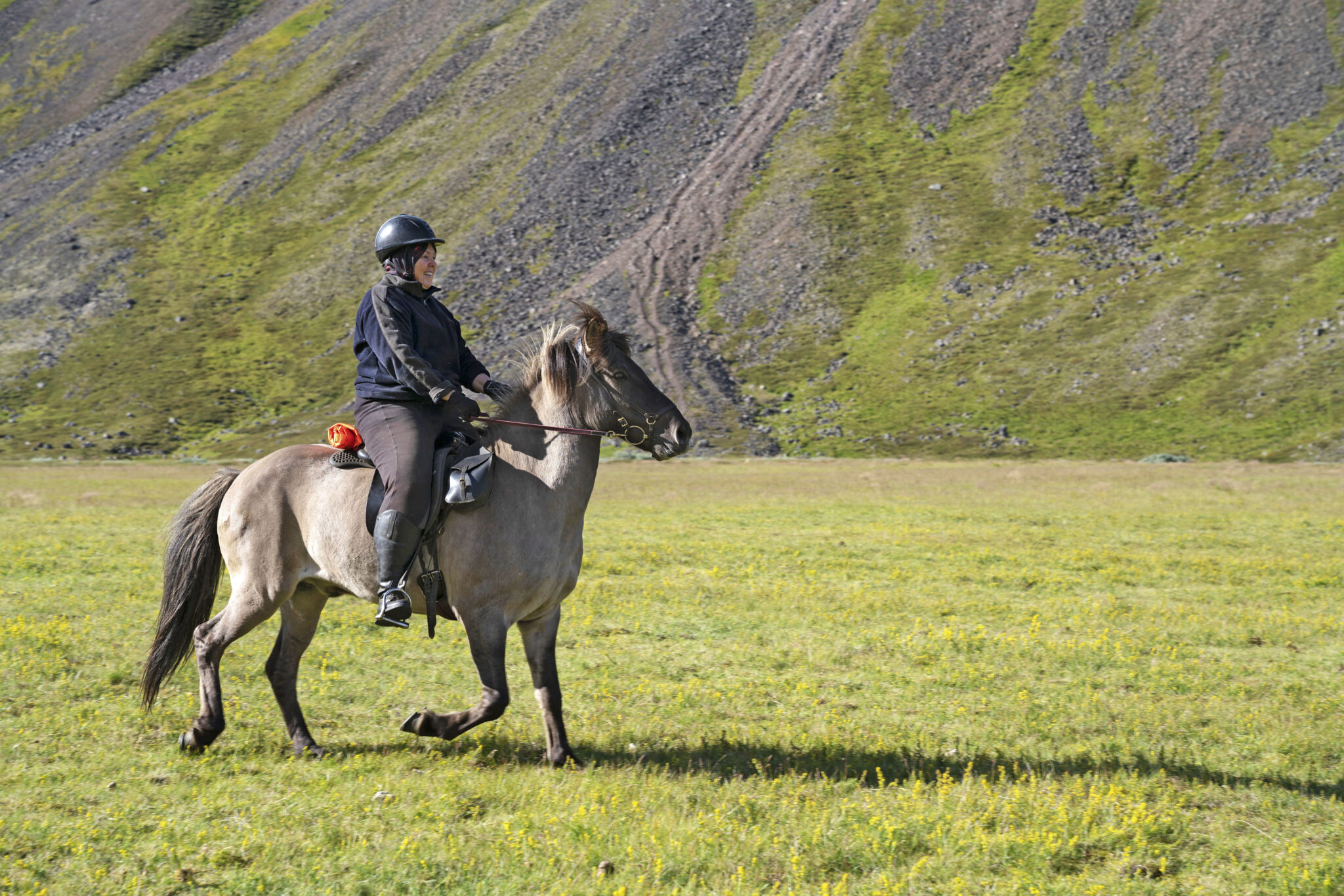 Leanne Goodluck is relatively new to travelling, but since she discovered Globetrotting there’s been no stopping her. In 2018 Leanne completed The Grape Horse Adventure in South Australia and the Icelandic Wilderness Expedition, and she’s already booked in for The Kimberley Ride next year. Read on to learn why Leanne has found her new happy place with Globetrotting.

What’s your day job?
I’m a police officer (not a mounted one – worst luck, we don’t have them in Tasmania!)

How have horses influenced or changed your life?
I love how riding brings together people who you may not spend time with, or have things in common with, otherwise. I have been a member of a riding club in my local area for over 30 years (!) as have a few others and we are still riding together after all that time – a bit slower these days, though…

What is your earliest memory of horses?
Working for a lady at the Royal Hobart Show leading pony rides when I was about 11. Getting there in the horse truck and then leading ponies for about 12 hours. I can’t remember being paid much (if at all) but as I didn’t have my own pony then, I didn’t care!

What was your childhood pony called?
He was a grey part draught rig called Billy and my non-horsey parents bought him for me when I was about 14. I had him for over 20 years and I’d say he probably chucked me off at least 50 times in the early years. These days if reminiscing I call him Billy the Bastard!

What have horses taught you the most?
That if you’re riding with a friend and you start laughing when your horses take off or do something naughty, you have no hope pulling them up or sorting it. Hahaha!

What was you first Globetrotting ride?
The Grape Horse Adventure in the Barossa Valley in April 2018.

What made you sign up and take the plunge for a Globetrotting holiday?
A message from a fellow club member asking for riders to join her on a riding holiday with fine food and sparkling wine. Who could resist that? 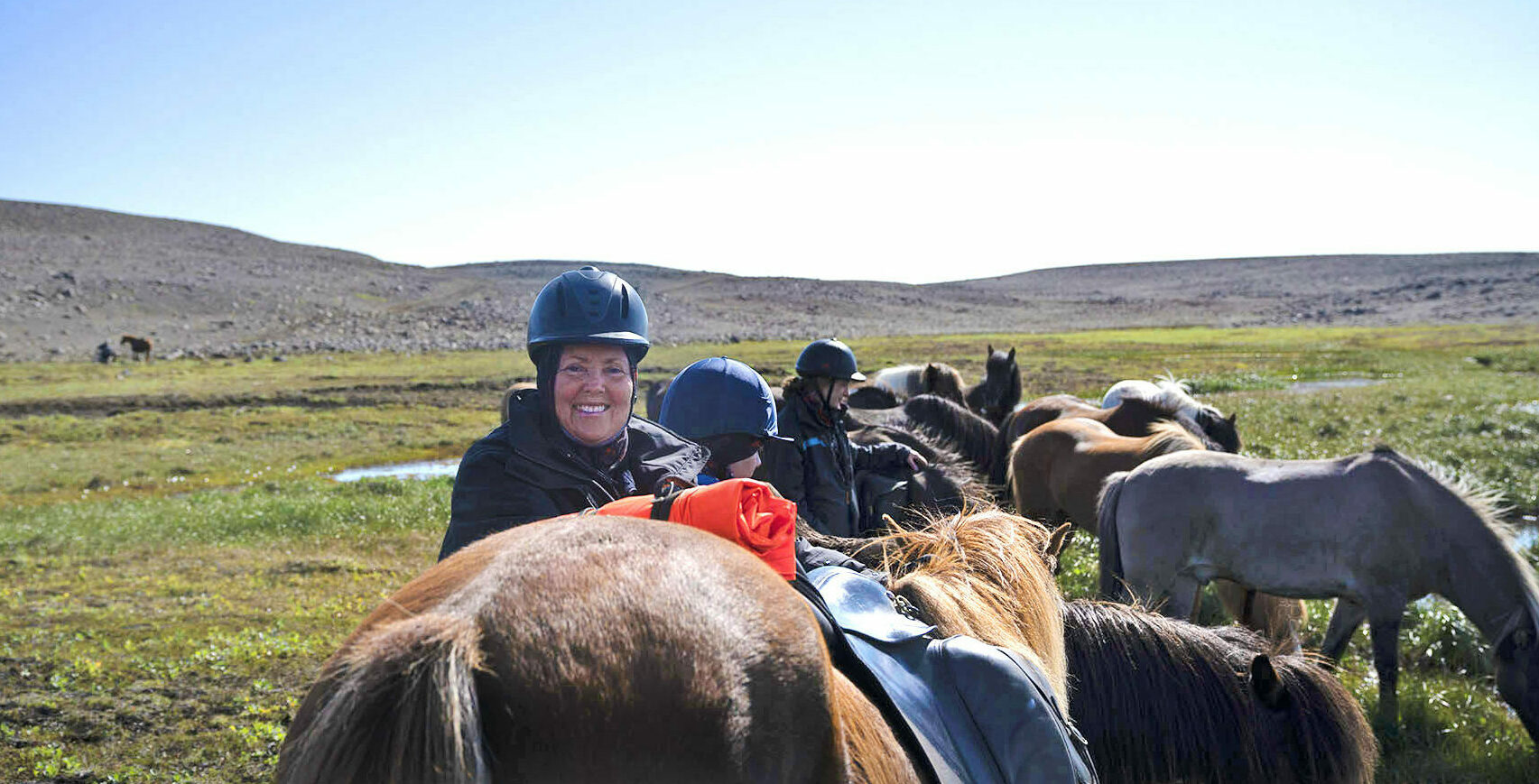 What globetrotting rides have you since completed/going to/wanting to complete?
I have just returned from the Wilderness Expedition in Iceland. I’m booked for The Kimberley Ride in August 2019 and am planning another overseas ride in 2019, but there are so many to choose from it’s making it hard. My short list is the Maasai Mara ride in Kenya and the Sumba Ride in Indonesia, but I’d be happy with any of them really.

What is your most memorable Globetrotting moment?
The first ‘get to know you’ ride in Iceland where we all tölted for the first time. It was so different and so much fun we were all practically squealing with delight! We were kindly asked later to try not to make so much noise when we set off the next day with the herd of 50 horses in case we set them off!

Why choose this type of travel? As in exploring a new country from the back of a horse?
I am a novice traveller as I’ve never really been interested in sightseeing type holidays. Now that I’ve found Globetrotting, I’m hooked. During both the Barossa and Iceland trips, we met local people and ate their food and learnt about them and their lives. It’s so much more personal than just sightseeing. In Iceland we lived their horse culture which, instead of going to the shack or camping in the summer, is packing up the kids and the horses (all 20 or 30 of them – that is usual for Icelanders!) and riding into the highlands. We even arrived at one hut for the night with one of those families already sharing the paddocks.

A tip that every globetrotter should know before going on a ride…
Don’t be afraid to ask questions of Globetrotting’s Kate or Laura about your trip. They are so lovely and helpful, and so travel savvy, they are your best resource.

Finish this sentence: Don’t leave home without…
A given really, but your phone for photos. I took a camera but ended up using just my phone as it’s smaller and easier to manage from the back of a horse.  And I would have loved to have had one of the back pack type water containers with the straw for drinking. I will definitely take one on my next trip to the Kimberley.