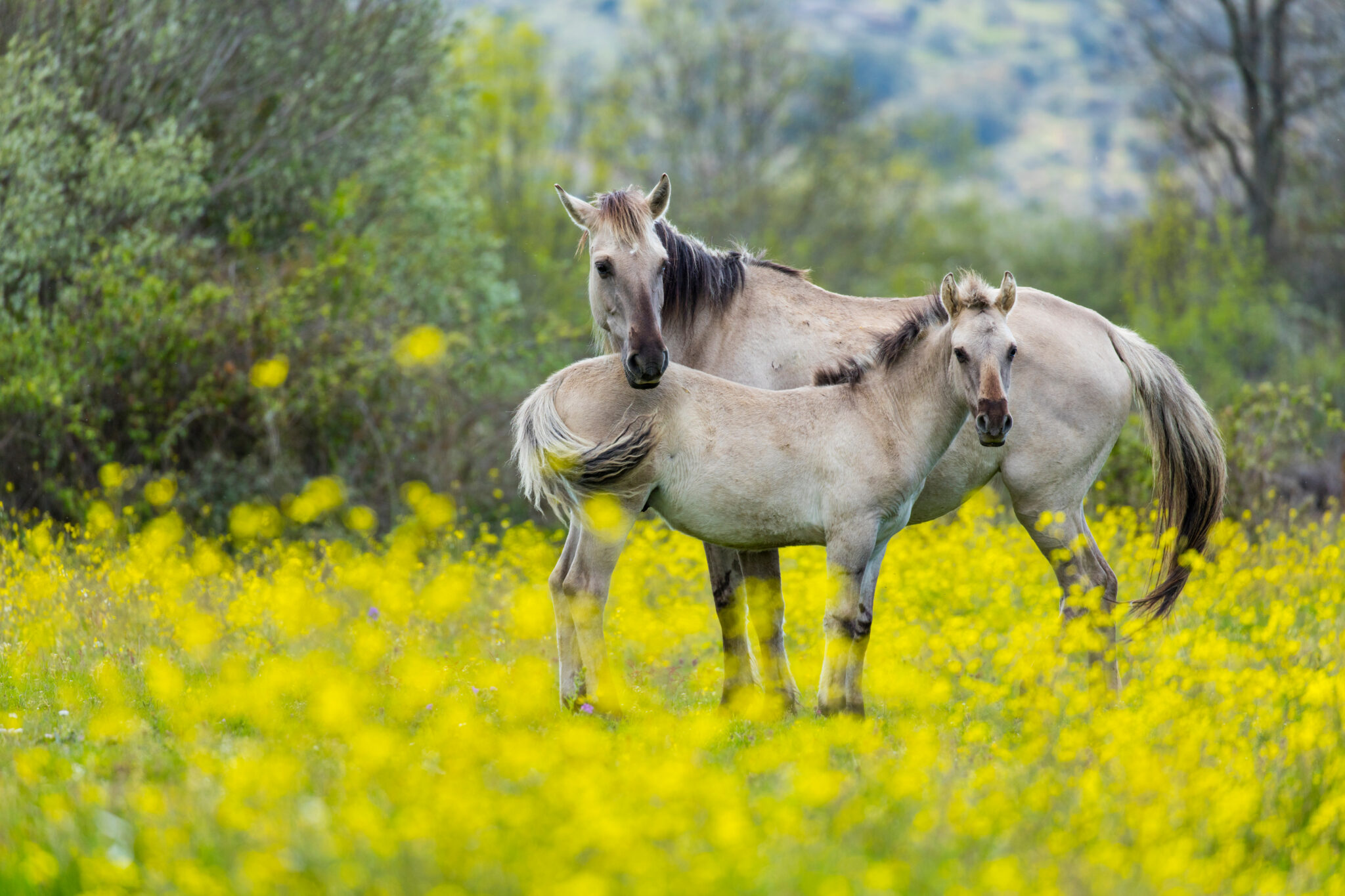 Breed origin: Thought to be the last remnant population of the indigenous wild horses that once roamed southern Iberia, there are many different theories as to the origins of the Sorraia horse. It is known that the breed (or subspecies, some claim) developed in the southern part of the Iberian Peninsula, and Palaeolithic art images depict equines with a distinct likeness to the Sorraia and similar zebra-like markings. Studies are currently being undertaken to discover the relationship between the Sorraia and various other wild horse breeds including the recently-extinct Tarpan, as well other breeds stemming from the Iberian Peninsula and Northern Africa.

Despite its ancient origins, the Sorraia was essentially lost to history until 1920, when a Portuguese zoologist , Dr Ruy d’Andrade encountered the horse during a hunting trip in the Portuguese lowlands. Below is an abridged version of his account:

‘Many years ago I had already noticed that many foals out of mares of pure Andalusian breeding were born with striped, straw-colored coats, especially those of yellow dun or grulla (mouse dun) color; many of whose stripes later disappeared completely as they became grey.

Later, on the lower Sorraia (river), I saw a herd of ca. 30 individuals, more than half of them were light duns, some were grullas, many with superabundant stripes, and generally in all aspects absolutely wild, or primitive, as if they were a species of zebra, or a hemionus (half-ass) species. I then decided to reconstitute this primitive kind of horse, in order to find out if it was indeed the origin of our Andalusian horses.’

Following this encounter, d’Andrade captured seven mares and established a wild herd on his own property. He introduced four stallions and studied the characteristics of their offspring before selecting one with which to continue the line. Although we have d’Andrade to thank for preserving the Sorraia horse and bringing it into the global scientific consciousness, this small herd unfortunately became severely inbred. Their semi-wild existence seems to have curtailed the negative effects that were expected as a result, but their future is in serious doubt, as only around 200 Sorraias exist today, all sharing one paternal line.

Following d’Andrade’s work with the Sorraia, it has become blatantly clear that the Sorraia played a key ancestral role in the development of the Lusitano and the Andalusian. More recently, they have also influenced various breeds in North and South America, where they were brought by the Spanish conquistadors as a hardy and versatile riding horse. In particular, many Mustang populations display strong Sorraia characteristics such as dun or grulla colouring and primitive markings. This testifies to the strength of the Sorraia’s genes when mother nature is left to her own devices.

Distinguishing features: The Sorraia horse is small but hardy and well-adapted to the often harsh conditions in which it evolved. It has a long head, often with a convex profile, high-set eyes and fairly long ears, a deep yet narrow chest, straight legs with well-defined tendons, hard hooves and a sloping croup. The Sorraia’s long shoulder leads to prominent withers, which meet a long, slender neck and a straight back. All in all, the Sorraia appears slight yet strong, standing 14.1 to 14.3 hands high. Sorraias are known as easy keepers, thriving on very little feed and needing little human intervention to remain healthy. They have an independent nature, but once bonded with their rider, they are loyal, willing and versatile mounts.

On adult Sorraias, the lay of the hair can create the appearance of stripes or ‘barring’ on the neck and chest. For the same reason, foals can often appear to have stripes all over, reminiscent of zebras. This is referred to as ‘hair stroke’. Sorraias are usually dun in colour, or a dun variation called grullo. Primitive markings are common, including a black dorsal stripe, black tipped ears, horizontal striping on the legs and a dark muzzle. Sorraia horses have bi-coloured manes and tails, with lighter coloured hair fringing both sides of the longer-growing black hair.

Modern day Sorraia: These days the Sorraia horse has become the focus of preservation efforts, with European scientists and other enthusiasts forming projects and establishing herds to assist in the re-establishment of this breed from its current endangered status. However, inbreeding still poses a huge risk to Sorraias. The best hope for the breed lies in the establishment of a reserve in which they can live wild or semi-wild, allowing natural selection to increase their genetic resilience over time.