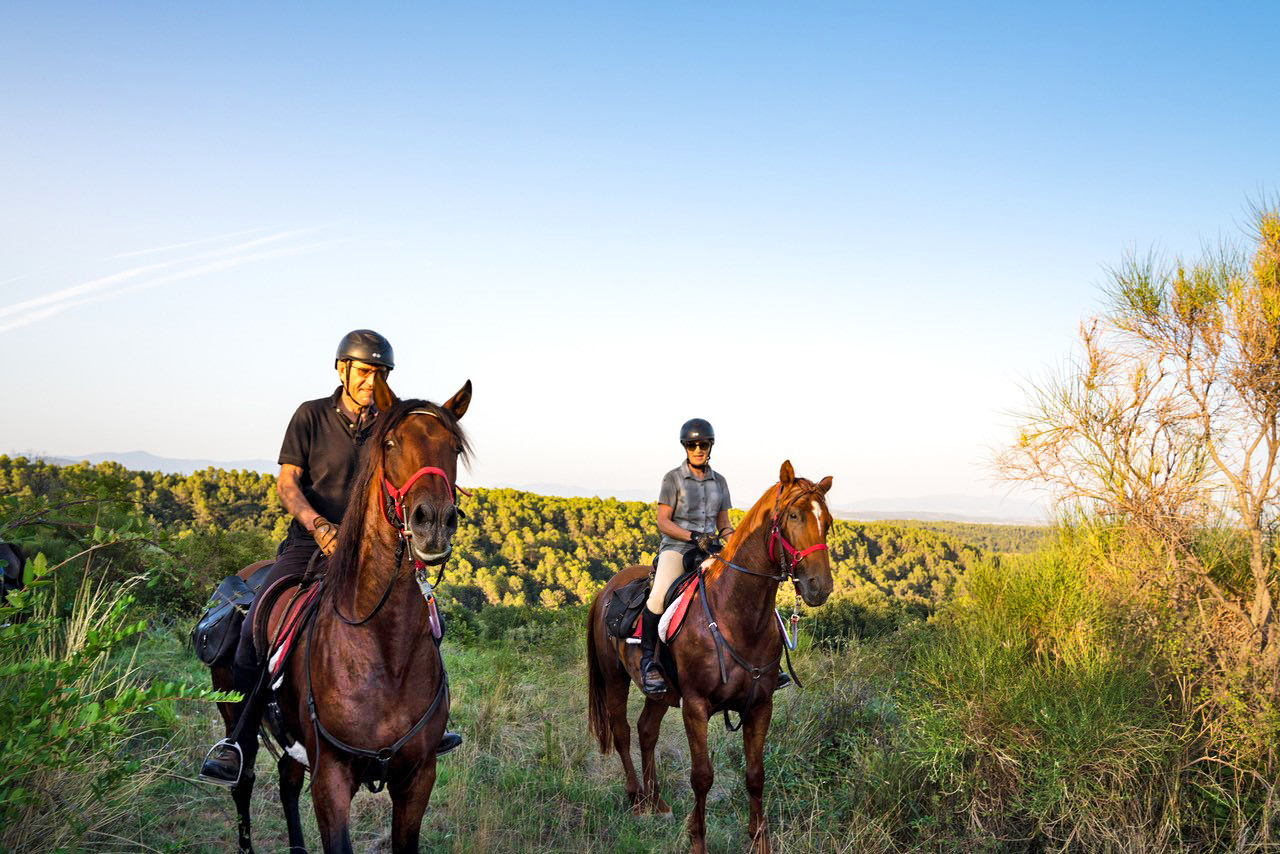 Globetrotters Dave and Alison Sandy have been around horses for most of their lives and recently completed our ride in Catalonia, Spain. Like so many before them, they now have a long wish list of future Globetrotting rides. Read on to learn more about Dave and Alison’s horsey history, and why they love horse riding holidays as much as we do.

What are your day jobs?
We have both been  happily retired since 2009. Alison was a teacher and Dave was a mining engineer.

How have horses influenced or changed your life?
This is a hard question to answer. If we were not interested in horses our lives would be completely different in many different ways – for instance, we would not be living on a property in the country.
Alison: As a child I was very shy and unsure of myself. At about the age of 10 my mother persuaded me to try horse riding but I was not very brave and initially didn’t enjoy it very much as I was too scared. A couple of years later my Mum sent me on a riding holiday in Buckinghamshire. It was fairly chaotic, and the rides were mostly supervised by young teenage girls. I rode a fast little palomino pony who always wanted to be up the front with the larger horses ridden by the teenage girls, so I basically had to learn to stay on at a gallop up and down hills. It was the making of me when I realised that I could do it. We had a gymkhana and quiz night on the final night of the holiday and I won first place complete with a (plastic) silver cup and red rosette. From then on my confidence increased hugely.
Dave: Although I rode as a child, I never really started riding seriously until our children became teenagers and lost interest in riding. I started riding our daughter’s pony to keep Alison company. We mostly did trail rides in the forest reserves, which I was okay at, but I didn’t really know what I was doing. We were both still working – Alison was doing a fairly intense remedial teaching job in a very disadvantaged school and I was running a small mining company, which was struggling, so we both had fairly stressful jobs. We found going for a two hour ride in the forest on a Sunday morning a very good way to unwind after a stressful week. Alison often said it fed her soul riding through beautiful old forests. There were a couple of places where you could have a flat out gallop up a hill, which was always so exhilarating and, for me, terrifying at the same time. Somehow, having a few moments of absolute terror put some of the issues that were stressing me at work into perspective. We then bought a Thoroughbred for me to ride and I built an arena on our property. I tried to improve my riding, which was very frustrating. We tried various instructors but the lessons were a bit spasmodic and I didn’t make much progress. I was good at staying on a horse, but not much else. A few years later a very good instructor moved into a property just up the road from us. We went to him initially as preparation for a riding holiday in Mongolia, but he was so good that we have continued with him ever since and now, in addition, attend clinics that he organises with mainland instructors.
Today, horses are central to our daily lives. We have three Thoroughbreds which we ride at least 3 times a week. In addition, we have two ponies, which we keep for our granddaughters who ride at our place 1-2 times a week.

What are your earliest memories of horses?
Dave: Riding in a pony trap with my Grandfather in the Kentish countryside.
Alison: The Milkman giving me a ride in his milk cart and the smell of horse poo and wee, and an old lady on our street rushing out to pick up the poo for her roses.

What were your childhood ponies called?
Alison: Sooty and Sapphire.
Dave: Blaze. He was owned by a stable on a farm outside a Zambian Copper Belt town called Luanshya where I first learned to ride. He was a strawberry roan with a white blaze – hence his name. He wasn’t a very nice horse as he used to bite, but he was okay once you were mounted.

What does riding or being with horses mean to you both?
Dave: Mindfulness, peace and being as one (some of the time!) with these amazing animals.
Alison: Joy and calming. Horses ground me.

What have horses taught you the most?
Dave: Patience and self control.
Alison: Overcoming fear and remaining calm in stressful situations. 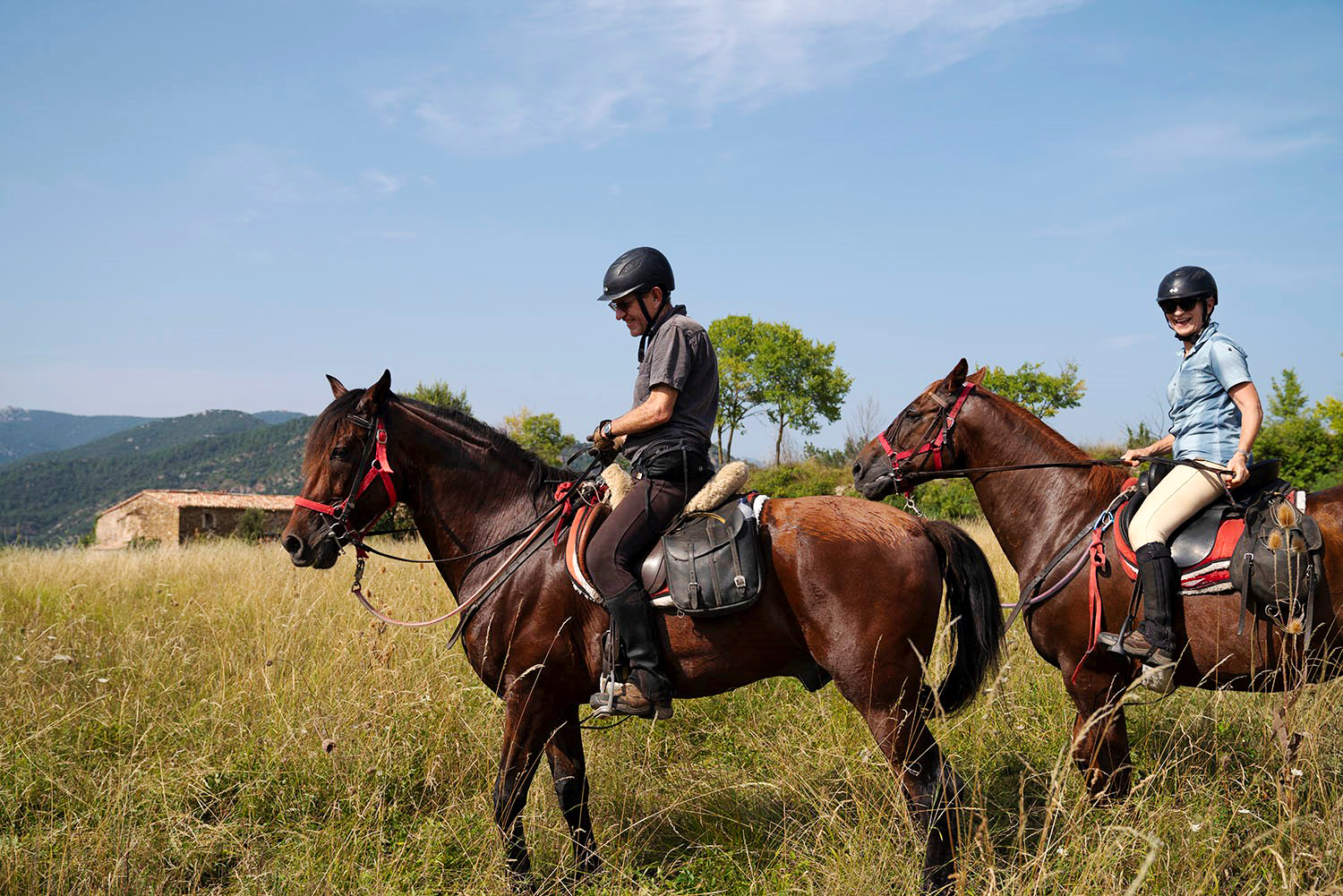 What was your first Globetrotting ride?
Catalonia, Spain.

What made you take the plunge and sign up for a Globetrotting holiday?
We wanted to have a riding holiday somewhere in Europe and the ride in Catalonia fitted in best with our other travel arrangements. The website was attractive to us as it had all the info we needed to understand what the holiday would be like. I had started following Globetrotting after Jocelyn Flint, one of the locals in Tasmania, won a Globetrotting trip to Mongolia.

Was this ride celebrating or marking a significant moment/milestone/achievement in your lives? If so, would you mind sharing?
Nothing really, other than the fact that at 67 and 65 years of age, every day we can still ride a horse and enjoy it is cause for celebration!

What Globetrotting rides have you since completed/planned/dreamed about?
This was our first Globetrotting ride. Others we’d like to do include Maasai Mara, Kenya, Okavango Delta, The Kimberley Ride, The Patagonia Trail, Argentina, Camargue, Tassie Tiger Trail, Mongolia… but the clock is ticking! The question is how long can we ride for before we become too decrepit?

What is your most memorable Globetrotting moment?
Swimming with the horses on the Catalonia Ride in Spain.

Why choose this type of travel? As in exploring a new country from the back of a horse?
By its nature, it takes you into the country/wilderness. Riding a horse is a very pleasurable and rewarding form of transport. It is easier than walking or riding a bike, you cover more ground and you see more of the country. I also enjoy the elevated position from the back of a horse, as you see things you wouldn’t from the ground. Quite often you go along routes and go to places you wouldn’t be able to easily get to with any other form of transport.

A tip that every globetrotter should know before going on a ride.
Leave your ideas about horse husbandry and riding behind you and learn and respect the horsemanship of the people of the country you are visiting.

Finish this sentence – Don’t leave home without…
A sense of humour.

Big thanks to Dave and Alison for taking the time to tell us about themselves, their lives with horses and their time in Catalonia. We’ll keep you posted as they tick more rides off their Globetrotting bucket list!
Click here to check out our ride in Catalonia, Spain.