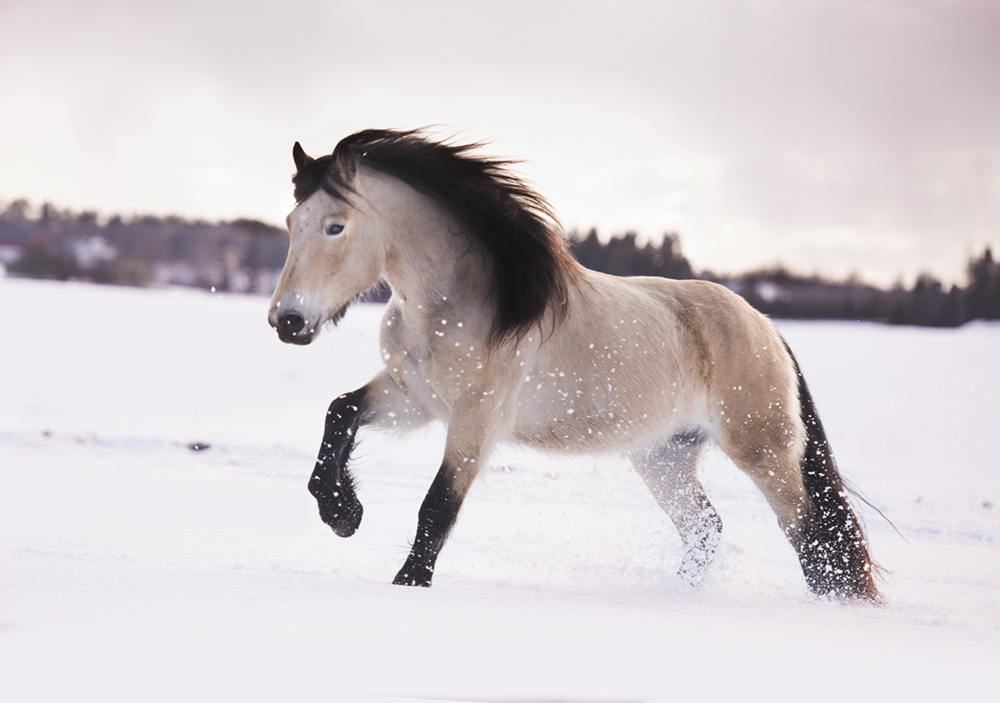 Breed origin: The Dole is the largest of Norway’s four native horse breeds. It originated in the Gudbrandsdal valley in the east of Norway and while organised breeding only began in the 19th century, the breed itself is thought to date back to around 400-800 BC. During this period, the Frisians (from the province now called Friesland in the Netherlands) traded frequently with Norway, bringing their big, black Friesian horses with them. Doles share many conformation traits with the Friesian, although this genetic link is yet to be officially confirmed. They also share similarities with Fell and Dales Ponies, two English breeds that were influenced by the Friesian during the same era, again thanks to Frisian traders. The Dole is a heavy, coldblooded horse, but it is among the smallest of the coldblooded breeds, making it agile and fast as well as strong. As a result, over the centuries it has been used for a huge variety of tasks and disciplines ranging from harness racing to heavy draught work. Being a work horse and a carriage horse, it was selectively bred for both elegance and smooth, ground-covering paces; for both refinement and substance.

Breeding of the Dole was formalised with the creation of the first studbook in 1841. Around this time, harness racing was increasing in popularity and the Dole Trotter was developed to cater for the local demand. In 1872, the studbook was split into two types: the coldblooded trotter, which was lighter and faster, and the heavy horse, which was larger and stronger. The Norwegian Trotting Association was formed soon after, and for a few decades the two Dole types were kept quite separate. The Dole Trotter (or Norwegian Trotter) was infused with Thoroughbred, Arabian and various trotting and draught bloodlines to improve its capabilities as a race horse and a riding horse. To this day, the Trotter is considered by some to be a separate breed rather than a subtype.

Meanwhile, the heavy Dole type, commonly known as the Dole Gudbrandsdal, was in great demand during World War II, being used extensively during Germany’s occupation of Norway. However, after the war, the Dole population decreased dramatically as working draught horses were replaced by machinery. Thankfully, in 1967 the National Dølehorse Association was established to preserve and promote the original, heavier Dole type. While the Dole Trotter studbook is still kept separate from the Dole Gudbrandsdal studbook, the distinction between the two types has become less clear as interbreeding has increased. The positive side of this is that the genetic strength and population of the breed have both risen in recent years, with selective breeding correcting conformational issues and helping re-establish the original type.

Distinguishing features: The Dole has the conformation of a light draught horse: big-boned, muscular and compact. The most common colours are black, bay, chestnut and brown, but dun, grey and palomino are also seen. Doles have a very thick, long mane and tail, and they grow a dense winter coat. They stand between 14.1 and 16 hands high, making them one of the smallest draught breeds. Their head is small and straight, with a square muzzle and a large forehead. Their neck is short and very muscular, leading to broad withers, sloping shoulders and a deep, wide chest. They have a long, straight back, a broad, slightly sloping croup and powerful hindquarters. Their legs are stocky, with solid joints, large, hard hooves and plenty of muscle. Many Dole horses also have feathering on their lower legs. All in all, this is a powerful yet agile breed combining the best of both the coldblooded heavy horse and the lighter riding horse. It has a smooth, ground-covering trot and incredible pulling power. Doles are much loved for their intelligence, elegance, calm disposition, hardiness and stamina.

Modern day Dole: There are now over 4,000 Dole horses in the world, with most remaining in their homeland. Many of these are set loose in the mountain pastures in late summer or early spring, with groups of mares left under the protection of stallions that have been carefully chosen by the breed association. It is not uncommon for mares to foal in the mountains, but while there are predators (including bears), the stallions are such fierce protectors that there is no concern for the safety of the herd.

In Norway, Doles are still used for farm work and heavy pulling jobs. When used in forestry, they cause less habitat damage and can navigate narrower roads than tractors and logging rigs. The Dole Trotter is still used for harness racing, and both types are popular all-purpose riding horses.