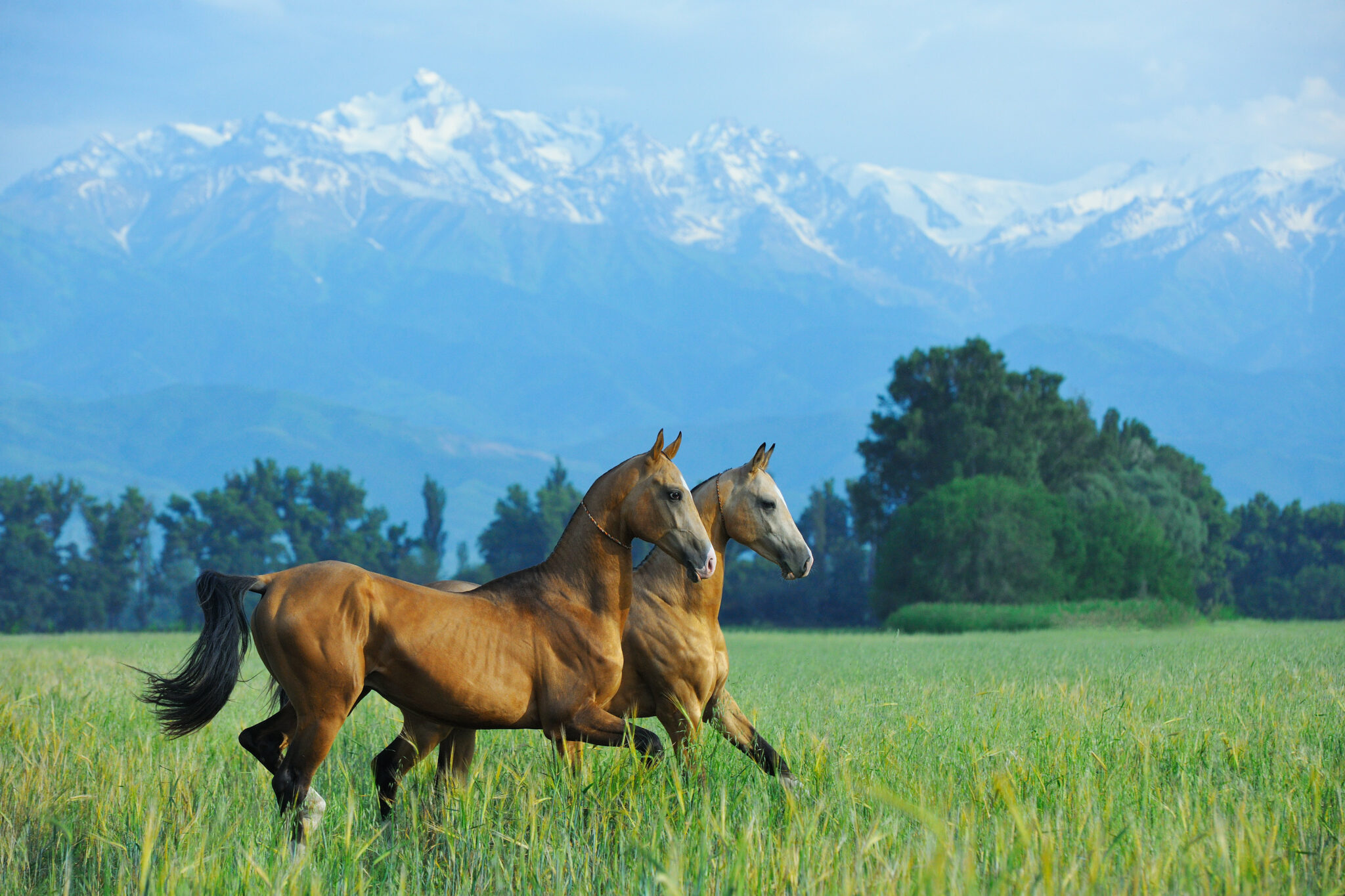 Breed origin: One of the oldest living breeds of horse, the precise ancestry of the Akhal-Teke is difficult to trace. The breed is very similar to, and possibly the direct descendant of an ancient horse known as the Turkoman, or Nisaean, horse. This horse was one of four ‘types’ of horse that migrated across the Bering Strait from America to Russia and Central Asia many thousands of years ago. Since the Middle Ages, it has been purpose-bred by Turkmen tribes as a lithe, speedy riding horse. In the second century B.C. a Roman historian wrote: ‘These horses, worthy of the most powerful rulers, are strikingly beautiful in appearance, they move lightly under the rider and lightly accept the bit; the head with its Roman nose is carried high and their golden manes flow majestically in the wind.’ As a treasured possession used for raiding, travelling, trading and as a status symbol, the horses were crucial for both income and survival. Their speed, stamina, courage and beauty made them highly coveted by every empire within trading distance. They were also used to improve and develop numerous other breeds, and although the question of whether the Arabian or the Akhal-Teke came first is still hotly debated, the genetics of these two breeds – as well as the Barb – points undeniably to a common ancestor.

The Turkmens bred, managed and trained their horses in very specific ways. The bloodlines were passed down through an oral tradition from one generation of breeders to the next. Stallions were covered from head to tail with layers of felt to keep their coat short and shiny. Before raids, the Turkmens fed their horses a sparse diet to prepare them for the long and challenging journey with no water and very little food. Their leanness made it easier for them to run across the desert, with no extra weight slowing them down. Turkmens generally kept their horses singly, as part of the household, with no expense spared in their care and much affection given to them. As a result, they were extremely loyal to their family.

In 1881, Turkmenia became part of the Russian Empire, and the horses of this region were renamed Akhal-Tekes. Akhal is the name of the oasis around which they were predominantly bred, and Teke is the name of the tribe that lived there. However, they were also known in Russia as ‘argamaks’, and were especially popular for the following two centuries. In fact, in the first half of the 18th century, a third of all stock at Russia’s state studs were argamaks! The Orlov Trotter and the Don owe much to the influence of this breed. Russian breeding programs were initiated to meet the great demand for these horses among breeders, horsemen and the aristocracy.

In the early 20th century, Thoroughbred bloodlines were introduced in an attempt to breed a faster long-distance racehorse. Of course, the Thoroughbred as a breed was less than 200 years old at the time, with Akhal-Teke, Barb and Arabian lines still expressing themselves strongly. Nonetheless, these crossbred horses didn’t have the resilience of purebred Akhal-Tekes and many failed to survive in the harsh conditions of Central Asia. They were still accepted in the studbook (which was closed in 1932) until a fateful endurance race in 1935. Organised by the Turkmen people as a means of showcasing the incredible stamina of the Akhal-Teke, the race was 2,580 miles (4,152 kilometres) long, stretching from Ashkabahad, the capital of Turkmenistan, to Moscow! The route included a 225 mile (362 kilometre) desert crossing, which the horses completed in three days. The race was completed in 84 days and at the end, it was noted that those horses with Thoroughbred bloodlines were in much poorer condition. Subsequently, the studbook ruled that any crossbred horses born after 1936 would not be considered purebred Akhal-Tekes, although those born before were allowed to remain in the studbook. Because the breed population was fairly small, today, every Akhal-Teke has some Thoroughbred ancestry, even if it’s just a small percentage. It’s partly due to this that the studbook now has stringent measures in place to protect the breed’s integrity. 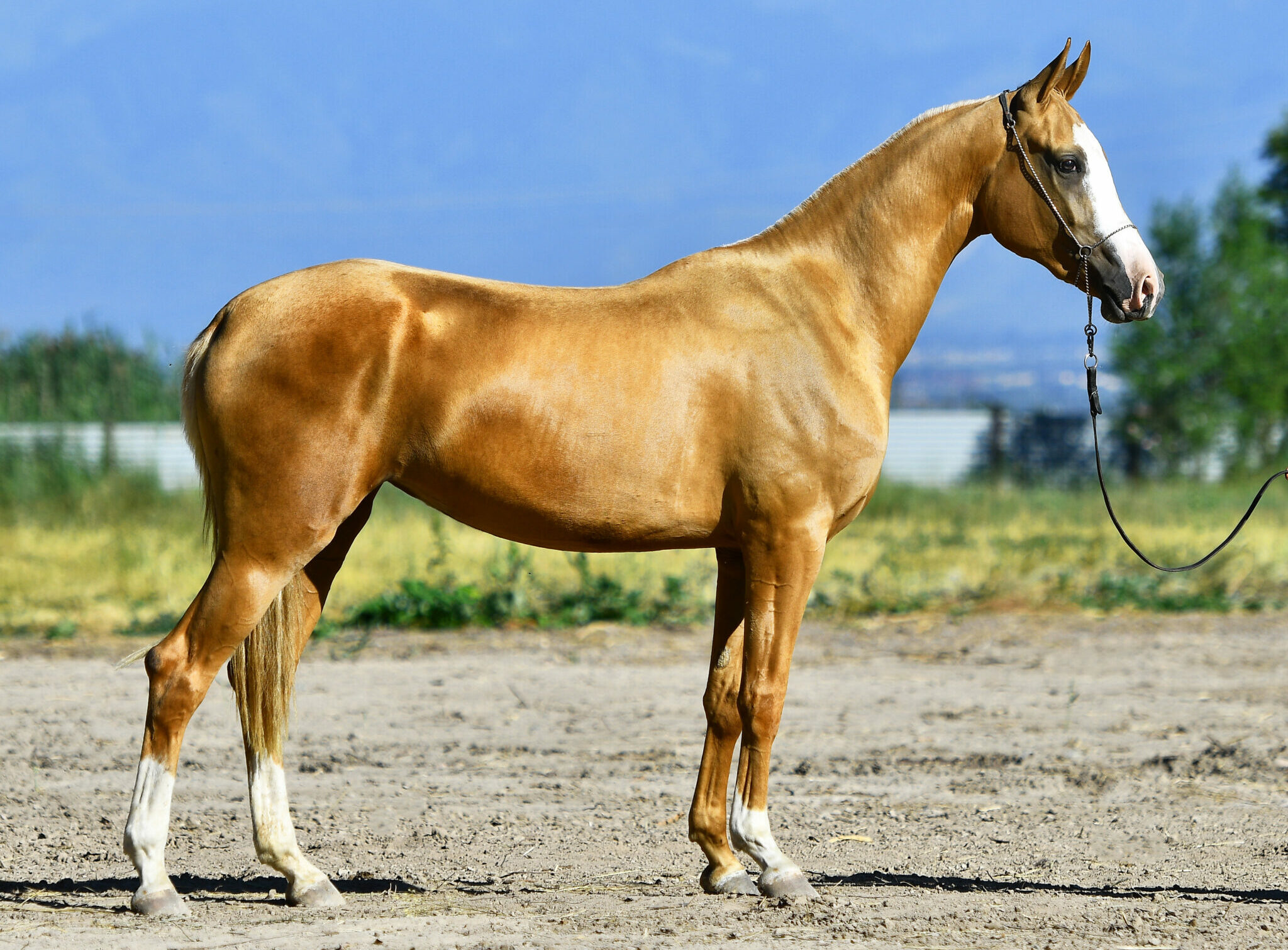 Distinguishing features: Akhal-Tekes are the horse equivalent of a greyhound: long, lean, athletic and elegant, with flowing paces. They are renowned for their speed, endurance, intelligence, nobility and beauty. Their long, tapering head meets an exceptionally high-set, thin neck, which flows into high withers and a narrow chest. Their long back connects to a flat yet deep rib cage and a powerful croup. They have sloping shoulders, well-muscled hindquarters, long, clean, strong legs and small, hard hooves. Their flexibility and elasticity gives them exceptionally smooth, ‘floating’ movements. Akhal-Tekes usually stand between 14.2 and 16 hands high and can be palomino, bay, buckskin, black, brown, chestnut, grey, perlino or cremello. They have a silky yet sparse mane and tail; the mane is often shaved to accentuate the shape of their neck and head. Their coat has a dazzling metallic appearance caused by the unique structure of their hair: light bends through one side of the hair and refracts out the other side, creating a golden sheen. Although their skin is thin and their coat short and fine, in winter, Akhal-Tekes grow a dense undercoat to help them survive the harsh climate of Central Asia. Tough and resilient, they can live on sparse food and water and rarely have health problems. Being sensitive and loyal, they bond closely with their handlers and their sometimes-fiery, proud temperament is seen as a positive trait by lovers of the breed.

Modern day Akhal-Teke: There are currently about 6,600 Akhal-Tekes in the world, mostly located in Turkmenistan and Russia, although they are also found in other parts of Asia, Europe, North America, Uruguay and Australia. They remain a source of great pride for Turkmenistan, being featured on the country’s coat of arms, stamps and currency. Due to their natural athleticism, Akhal-Tekes are exceptional sport horses. They are known for their form and grace as show jumpers and dressage mounts, and are also an increasingly popular choice for eventing, racing and endurance riding.