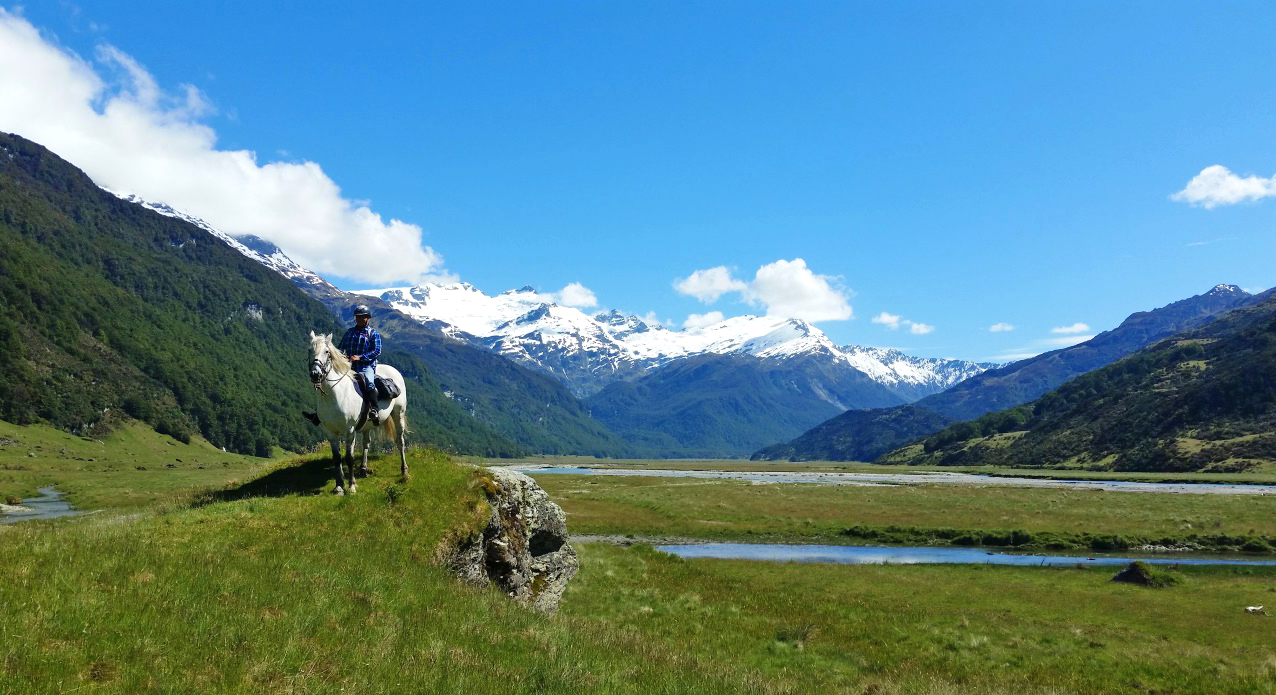 Okay globetrotters, I know we’re not allowed to pick favourites, but Anthony Tietze is a legend in his own right here at Globetrotting HQ. His positive outlook and amazing story-spinning abilities see him make firm friends on every single horse riding holiday he goes on – and he’s been on a fair few! We simply had to introduce him to you – check out his Q&A below.

What is your day job?
I am a structural engineer, largely retired now.

How have horses influenced or changed your life?
Horses have given me something special, something that most people haven’t got and will never experience. Sort of like being part of a privileged group where a world without horses is inconceivable.

What is your earliest memory of horses?
When we were little kids the family would go on holidays each Christmas to the Barrington Guest House, beyond Dungog in the Hunter Valley. It was a lovely place (although not up to today’s expectations of luxury). The Barrington River swimming holes were a short stroll through the rainforest, there was tennis, and pademelons came in to feed in the evenings. The guest house also ran stables with morning, afternoon or sometimes day-long rides. The horse riding was always the highlight for me.

What was your childhood pony called?
In the sixties when I was maybe 11 or 12, some friends and I would go to a farm near Penrith, west of Sydney, which ran a horse camp. Quite formal training – dressage, jumping, campdrafting, care and maintenance of your horse. It was a week-long camp and I went there on several occasions. I always rode the same horse, called Cassidy.
Some years later I owned a horse for 24 years, from birth to death, at his farm on the Comboyne Mountain, west of Taree in NSW. Initially he was called Littlehorse, but this segued into Bighorse for obvious reasons. 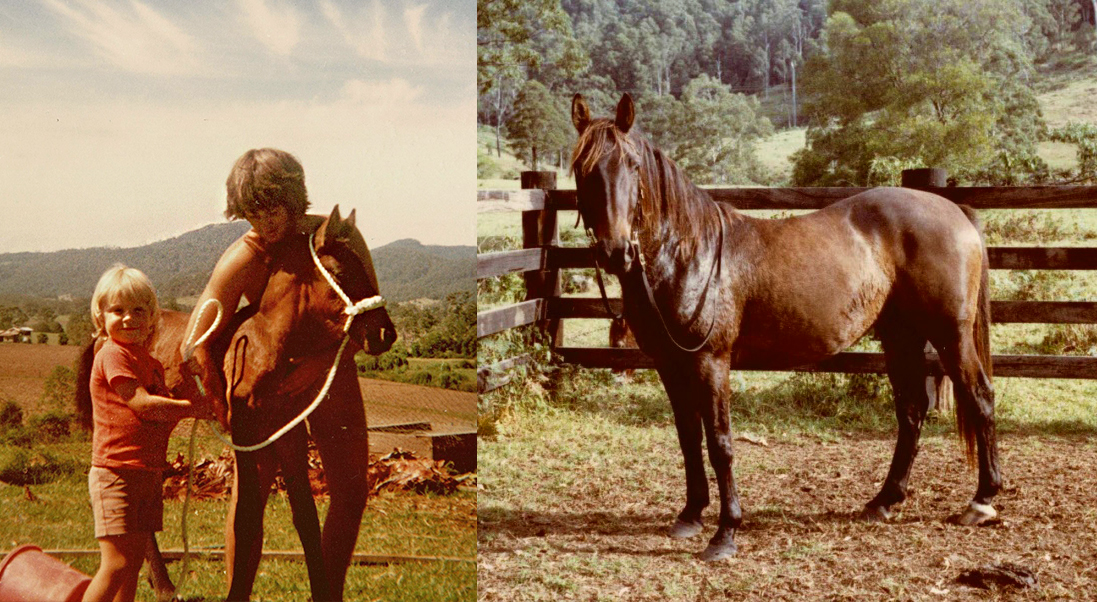 What does riding or being with horses mean to you?
It is the freedom, being out in the great outdoors, working with cattle or just riding. It gets you where others can’t, or just don’t, go.

What have horses taught you the most?
The ability to talk with animals is a skill, a skill that many people don’t have or don’t even know exists. How many times have you heard a mother say to their kid, ‘Get away from that animal, don’t touch it. It’s dirty!’
Horses listen to you, flickering their ears to catch what you’re saying. And they don’t answer back. You can talk clean, you can talk dirty, so long as you do talk to them. But what they really like is to be told what a good horse they are.

What was your first Globetrotting ride?
I’ve been on many Globetrotting rides. I think the first was the Craig’s Hut ride in the Victorian high country with Laura and Christian Hayes.
I rode George, a big strong chestnut gelding in his prime. A good walker. Loved people, but didn’t like horses much. 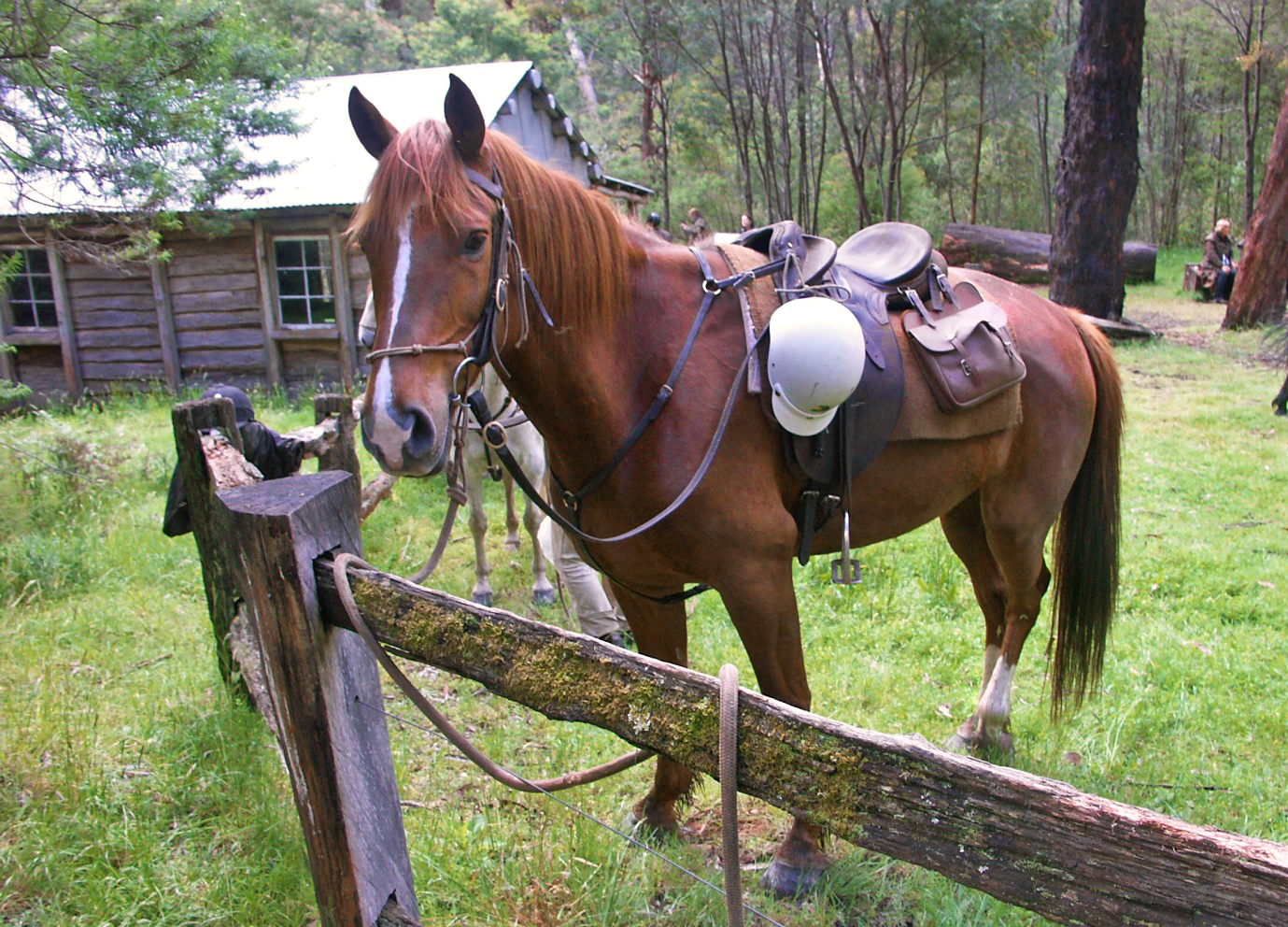 What made you take the plunge and sign up for a Globetrotting holiday?
I’m a sucker for temptation. Once I was on the Globetrotting emailing list, it was only a matter of time. The information is well presented and it is clear that all the Globetrotting rides are well vetted before being advertised. They are always comfortable (although I’m relatively indifferent about the trappings). For me it’s all about the horses.

Was your Globetrotting ride celebrating or marking a significant moment/milestone/achievement in your life? And if so, would you mind sharing?
No.  I just like riding, and it is easy to sign up. You just have to front up at the right place at the right time and it all happens.

What Globetrotting rides have you since completed/planned/dreamed about?
I’ve completed the Craig’s Hut ride in the Victorian high country, the Glenorchy Back Country Ride in the South Island of New Zealand, The Kimberley Ride out of Kunnunurra in Western Australia, the Mount Goomboorian ride in the Gympie area, South East Queensland, and The River Valley Ride in the North Island of New Zealand.
I am now booked on The Shoalhaven Ride, south of Sydney (Maybe a little more upmarket than what I need, but it does seem to have turned out to be a good decision, what with the C-word at the forefront of all our minds).
The Scottish Borders Ride is another potential ride for me. The tradition of Common Riding dates back to the 13th and 14th centuries, during the continual land border wars both with England and against other clans.

Why choose this type of travel? As in exploring a new country from the back of a horse?
I just like riding. You really do see the country on horseback.
These holidays suit me, as they tend to suit the solo traveller. Not because I’m friendless, rather that few of my friends have both the horsey inclination and the opportunity.
It’s a funny thing that this type of holiday tends to attract far more women than men. I’ve never really worked out why, but one of the rides had 13 women and me (I think I went okay, but sometimes I had to think hard to keep up my end of the conversation!). 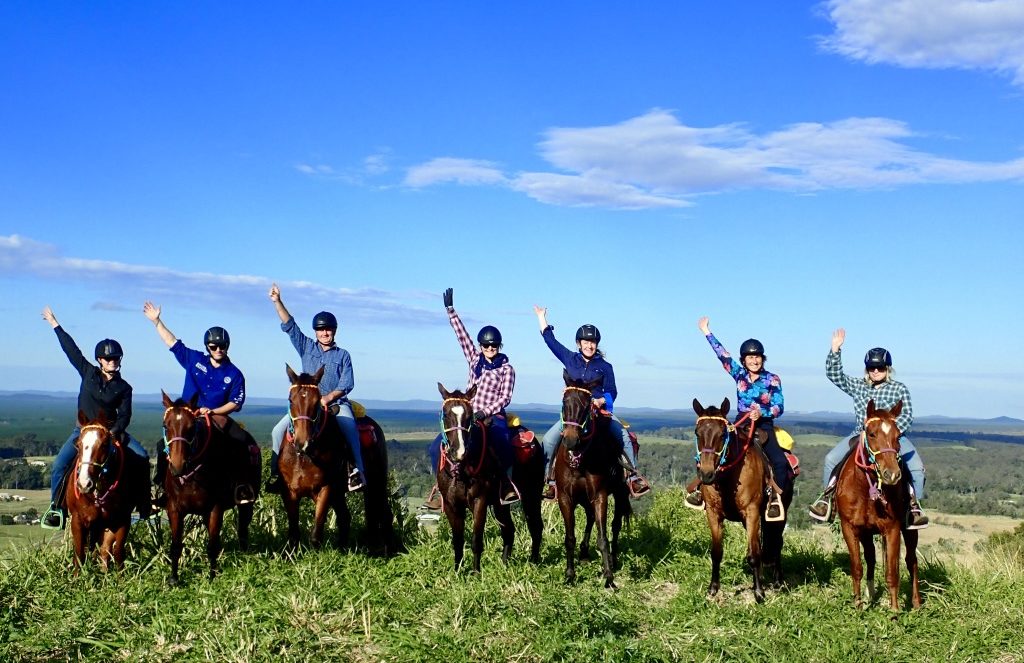 What is your most memorable Globetrotting moment?
Well that’s a tough question. Swimming with the horses in the swimming hole below Tommy’s place on The River Valley Ride was a whole lot of fun.
I also enjoyed the campdrafting on the Rainbow Beach, Bush & Cattle Ride. I won the blue ribbon on Rocket Man. (Working with cattle in one way or another always seems to satisfy my sensibilities.)

Who is your favourite trail horse of all time and why?
I rode Beer on the Glenorchy Back Country Ride. A big, strong horse in his prime, maybe 17 hands, trained as a hunter and I was told he is a four wire jumper. A bulletproof Percheron/Thoroughbred cross. 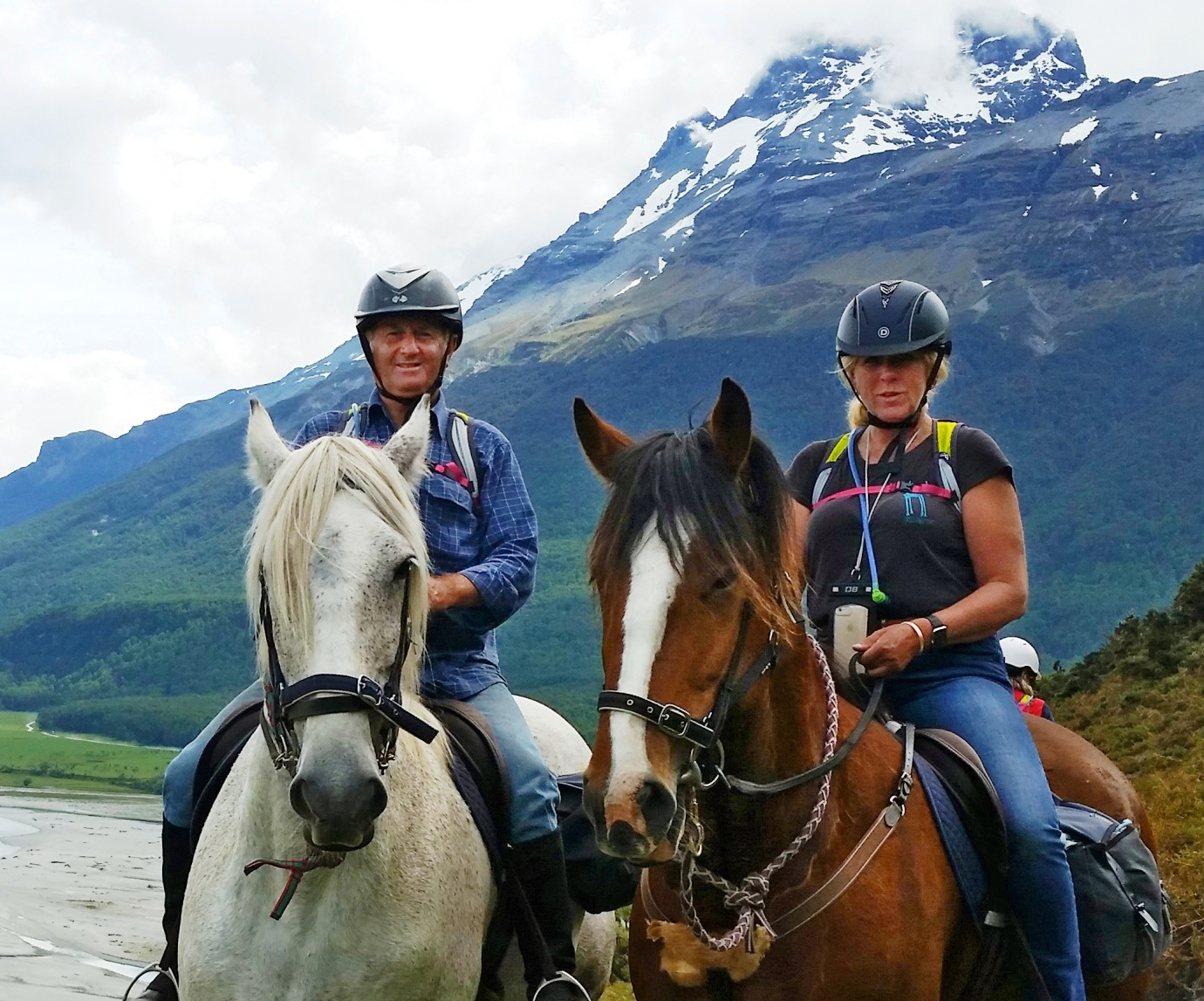 A tip that every globetrotter should know before going on a ride…
Practice up on your jokes, poems, storytelling and songs. It’s a dying art.

Finish this sentence: Don’t leave home without…
Your head torch and your insect repellent (a New Zealand sandfly bite keeps on biting, well after you’ve moved on – they can drive you to distraction).
A bottle of duty-free on the first night tends to break the ice with your fellow globetrotters.

Wise words! Big thanks to Anthony for taking the time to share his Globetrotting story.

UPDATE: Anthony has since completed The Shoalhaven Ride and we couldn’t resist sharing this photo of him and Flick admiring the view! 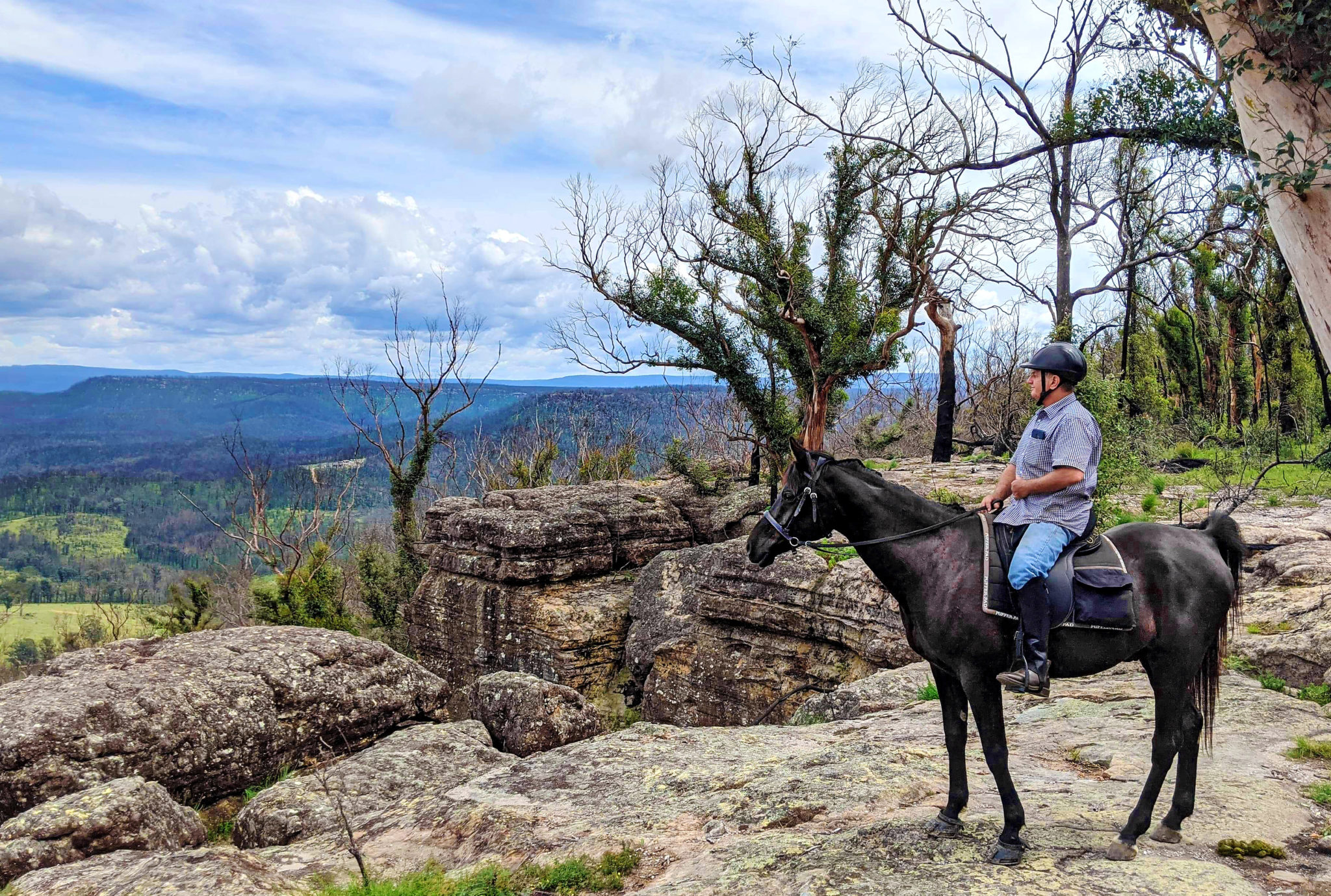