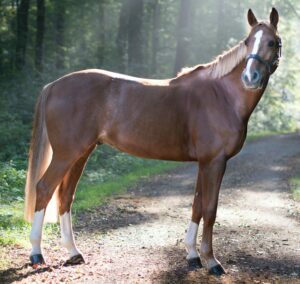 Breed origin: The Bavarian Warmblood developed from an ancient Bavarian breed called the Rottaler. The best Rottalers were calm, substantial, all-purpose horses used for everything from carriage driving to plowing to riding. A registry for Rottalers was founded in 1907, but when the breeding focus turned to competitive riding in 1963, they were renamed ‘Bavarian Warmbloods’. From the start, they have been developed as an Olympic-quality sport horse. To this end, the Rottaler bloodlines were mixed with those of the Hanoverian, Holsteiner, Rhinelander, Westphalian, Württemberger, Saxony-Thuringian Warmblood, Trakehner, Oldenburg, Cleveland Bay, Norman, Budyonny, Dutch Warmblood and Thoroughbred. The studbook is still open today, although careful breeding regulations ensure that pure Bavarian Warmblood stallions make up no less than 42% of the total breeding roster, and the Hosteiner (the oldest warmblood breed) contributes a further 42%. The breed is highly valued thanks to its incredible talent for eventing, show jumping and dressage. This was never clearer than in 1997, when a stallion called Lord Sinclair was sold for a total of 2.8 million francs in a German auction, making him the most expensive horse on earth at the time!

Distinguishing features: Bavarian Warmbloods have typical sport horse conformation, with a clean, dry head and limbs and an overall appearance of refinement and athleticism. They typically stand between 15.2 and 16.2 hands high, and all colours are permitted, although darker, solid colours are preferred. Unlike breeds with a closed studbook, the Bavarian Warmblood doesn’t have one set ‘type’; athletic ability and temperament, rather than a specific appearance, are the breeding aims. Bavarian Warmbloods are branded on their left thigh with a crowned shield outside the letter B. Their gaits are rhythmic and energetic, with a long, elastic stride. They are excellent jumpers and also have the natural self-carriage required of a dressage horse. They are docile, willing, adaptable and intelligent.

Modern day Bavarian Warmblood: The Bavarian Warmblood is seen competing internationally in the Olympic disciplines of dressage, show jumping and eventing. The breed is also a popular choice for combined driving and show hunting.