Breed origin: The Canadian horse descends from the stock that the French King Louis XIV sent to Canada (then called New France) in the late 17th century. It is not know for sure which breeds these horses were, but they needed to be incredibly strong and hardy to survive first the sea voyage and then life on the frontier. Not only that, they had to show enough elegance and nobility to encourage more settlers to come to New France! It’s thought that Dales Ponies, Belgians, Percherons, Norman Cobs and Bretons would have made up much of the original stock, with Andalusian, Barb and Arabian horses in the mix as well. Pacing horses were included to ensure that comfortable riding horses were available in the colony. Settlers were legally obliged to breed their horses, so the equine population increased very quickly. For almost 100 years, the horses were cross-bred with no outside influences, eventually resulting in a distinct breed of horse unique to Canada. The harsh natural environment ensured that only the toughest, most adaptable horses survived and they became highly valued in Canada and the north-eastern United States thanks to their reputation as easy-keepers with a great work ethic and incredible stamina. They even earned the nickname ‘little iron horse’ for their similarity to the big ‘iron horse’ – the steam train!

During the mid 19th century, when the breed population sat at around 150,000, three subtypes developed: a draft type, a trotting type, and a pacing type. Thus, one breed could meet all the Canadian people’s requirements. However, it wasn’t long before Canadian horses began to be exported for use on the sugar plantations in the West Indies, in the Boer War in South Africa, and in the American Civil War. They were also used to create ‘roadsters’, pacing horses that eventually became new breeds including the Morgan, Saddlebred, Standardbred and Missouri Fox Trotter. All of these exports, and war losses and cross-breeding meant that by the 1870s, there were less than 400 registered Canadian horses in existence – quite a drop from 150,000! Finally, in the 1880s, a studbook was created and a law was passed against further export.

The early 20th century saw a government breeding program re-establish the Canadian horse, but the mechanisation of farm work combined with two world wars put an end to this. Luckily, the Quebec government, along with enthusiastic breeders, took the reins and the breed’s population has been on the rise since then. Thanks to the Canadian horse’s high genetic diversity, there was no significant decrease in genetic variation, despite the breed’s various population losses. Today, there are around 2,500 Canadian horses, which still classifies as critical status according to the American Livestock Conservancy. It is gradually increasing in popularity and was dubbed the National Horse of Canada in 2002.

Distinguishing features: Canadian horses are usually dark in colour (i.e. black, bay or brown), although a few chestnuts are seen, too. On average, they stand between 14 and 16 hands high. They have a solid, powerful build with refined features. Their head is finely chiseled with lively eyes and a broad forehead. Their neck is arched and their chest, back and loins are broad and muscular. Canadian horses have exceptionally strong legs with short, thick cannon bones and well-formed, tough hooves that rarely need shoeing. There is often a little feathering on their fetlocks and their mane and tail are thick and wavy. They require little human intervention, thriving on plain feed and forage and seeming unperturbed by the freezing Canadian winters. They are much loved for their intelligence and sensible, kind, people-pleasing nature.

Unlike most breeds, there is a set naming system that is used to identify each individual Canadian horse, based on the Canadian Livestock Records Corporation’s registration format. First comes the prefix, the farm or breeding establishment that the foal was born into, followed by the sire’s name, and lastly the given name for the foal. A different letter of the alphabet is assigned to each year, and the foal’s given name must start with that letter.

Modern day Canadian Horse: Today Canadian Horses are mostly used for riding and driving, although they are also known for their jumping ability. They are seen in the competition ring in almost every discipline, and are also used for trail riding, farm work, logging and cattle work. 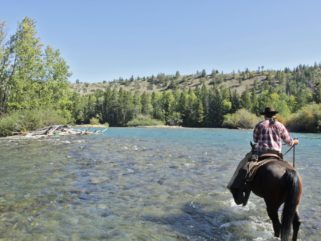 Canada and cowboys go together like maple syrup and bacon and grizzly bears and wild salmon. It’s easy to fall in love with this happy-go-lucky country and to explore it from the back of a horse is the icing on the cake.

*Bear viewing season is from late August to early October.