We are fortunate enough to have a HUGE range of horse breeds, both purebred and cross-bred, available for guests to ride on our Globetrotting holidays. From the nifty Quarter Horses on our American rides to the noble Lusitanos on our rides in Portugal, as a globetrotter, you are guaranteed to be matched with a suitable (and downright incredible!) horse no matter where in the world you travel.

But for those who are curious about the breeds most frequently represented by our guest horses, read on to be inspired and educated about the horsepower we are privileged to have on offer.

Andalusian
The Andalusian horse is the darling of Spain, an incredibly ancient breed with roots in the Iberian Peninsula dating back to around 20-30,000 BC! These horses have been revered throughout Europe for thousands of years, and today they are rapidly spreading across the world as their agility, elegance and power see them excel in a huge range of disciplines. Also known as the Pure Spanish Horse or PRE (pura raza española), Andalusians form the majority of the guest horses on our rides in Spain: Dressage in Andalusia, trail riding through Andalusia, the Catalonia Ride, the Catalan Coast Trail and the Andorra Trail. Whether you’re honing your dressage skills or exploring the countryside, these noble horses will have you feeling like royalty. 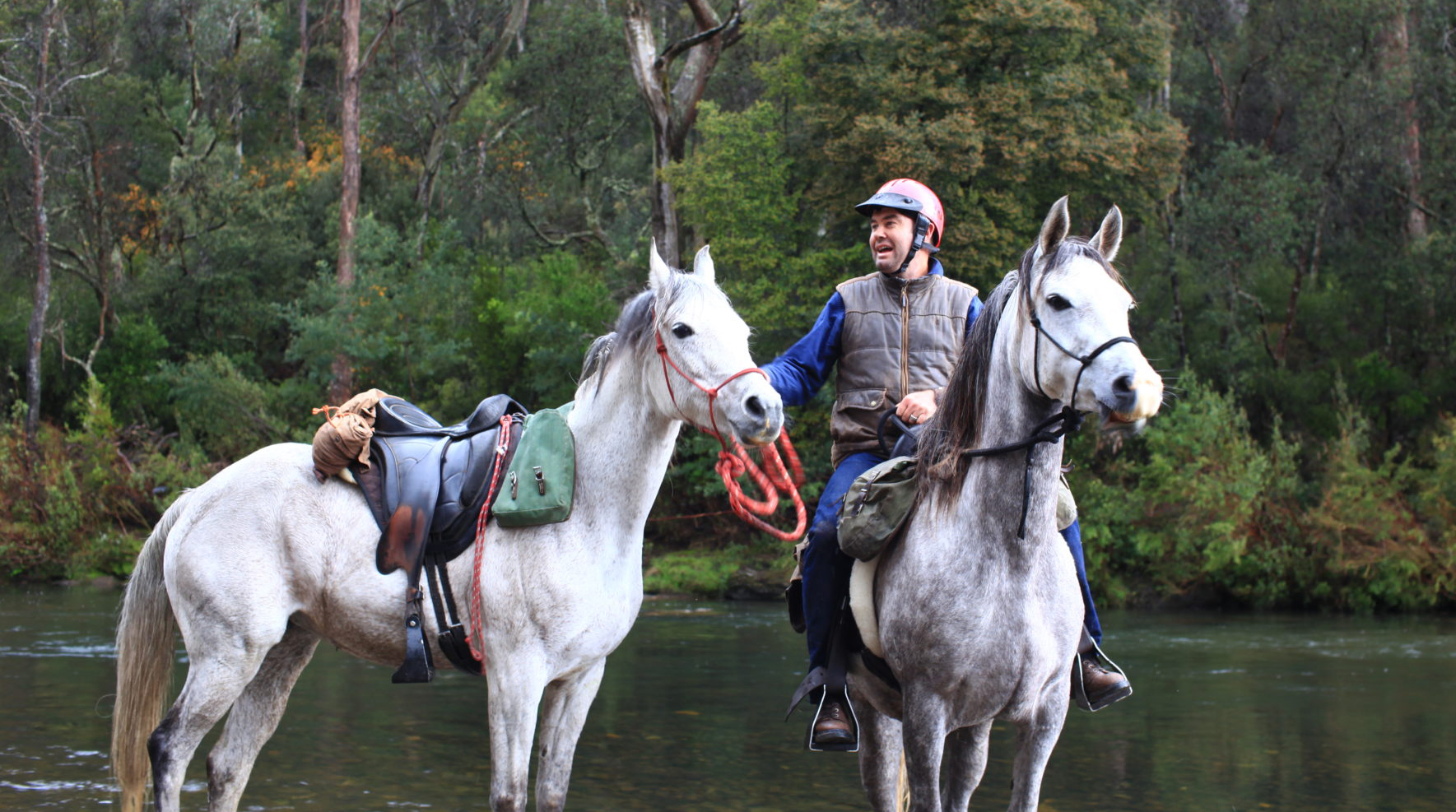 Arabian and Arab-cross
The Arabian is one of the best-known horse breeds in the world, and for good reason. The breed’s origins are tied to the movement of Bedouin tribes to central Arabia (the large peninsula connecting Africa and Asia) around 2,500 BC. The Bedouins valued their horses above all else for their beauty, spirit, intelligence, bravery, speed and stamina. As the world grew smaller, the Arabian horse spread further across it, and today the influence of the Arabian can be found in the vast majority of horse breeds. These people-oriented horses can turn themselves to most disciplines and especially excel at endurance riding thanks to the harsh desert environment in which they evolved. Arabians are also frequently crossed with other breeds to produce well-rounded cross-breeds. You can ride Arabian and Arab-cross horses on the Tassie Tiger Trail, the Grape Horse Adventure and The Shoalhaven Ride in Australia, in the Okavango Delta, Botswana, and on many more of our horse riding holidays.

Australian Stock Horse
The Australian Stock Horse is an iconic Aussie breed, its roots tracing back to the horses brought over with the First Fleet in 1788. Over the centuries, it has been carefully developed into a superior working horse that can switch from shepherding a flock to mustering a mob of cattle to cutting out a beast in the stockyards to taking the kids to Pony Club. Australian Stock Horses often become much-loved members of the family, and you’ll understand why once you’ve ridden them! Level-headed, smart, friendly, agile, tough and strong, these horses are no-fuss champions. The Margaret River Ride has a beautiful herd of Stock Horses, and you may also be lucky enough to ride them on The Kimberley Ride, the Craig’s Hut & High Country Ride and the Howqua River Ride.

Camargue
Named after the marshy coastal region in which they have lived since time immemorial, Camargue horses are often called the ‘horses of the sea’ – for they sometimes seem more at home in the crashing waves or wading through the wetlands than on dry land! Camargue foals are born with dark brown or black coats that fade as they age, soon becoming white (or technically speaking, grey). They certainly look ghostly as they pick their way through the marshes in semi-wild herds. And what a contrast against the coal-black bulls that they’re used to herd! Not only are they beautiful and totally at one with their environment, when you ride these horses on The Camargue Ride in France, you’ll soon see how powerful, agile, surefooted and gentle they are, too. 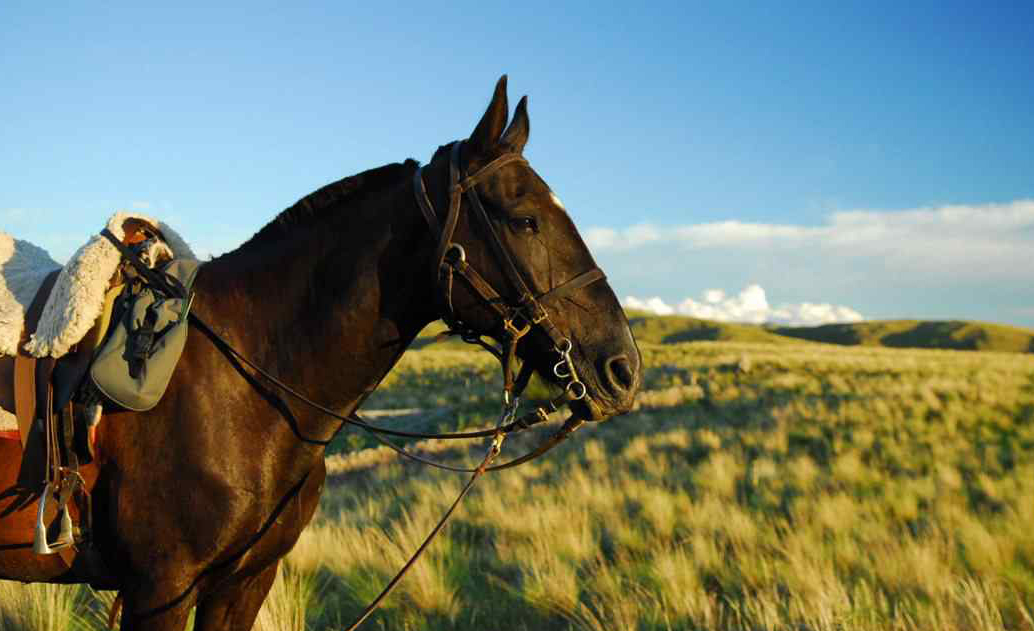 Criollo
The horse of the gaucho, the Criollo is Argentina’s pride and joy: a compact, strong and agile horse that descends from Andalusians set loose by Spanish settlers, which were later crossed with Thoroughbreds and draft horses. Having lived in the wild for many years, natural selection made the Criollo extremely hardy and surefooted. After they were again tamed in the 17th century, they became the ultimate estancia horse – agile, intelligent and strong thanks to their Andalusian ancestry and the generations spent living wild. They survive and thrive in the harsh weather and often sparse landscapes of their homeland, and relish the chance to put their cattle instincts to good use. Criollos are used as guest horses on the Estancia Ride in Torres del Paine in Chile, the Canyons & Waterfalls ride in Brazil, The Patagonia Trail in Argentina and our ride in the Sierras Chicas, Argentina.

Icelandic Horse
The only breed of horse currently living in Iceland, the Icelandic horse by necessity fills every need of the local people, from herding livestock to competing to traversing otherwise inaccessible regions. Typically, these horses stand between 13 and 14 hands high – but don’t let their short stature fool you! Icelandic horses were brought to Iceland long, long ago by the vikings, and have survived on this inhospitable island with very little human intervention ever since. They live outdoors year-round and are often left to roam in a wild state for months at a time. Their endurance, strength and bravery will leave you utterly gobsmacked, whether you ride them on the epic Icelandic Wilderness Expedition or the slightly gentler Touch of the Highlands Ride.

Lusitano
Native to Portugal, the Lusitano is an ancient and much-revered breed that has been used by the Portuguese for cattle work, as a farm horse and as a prized riding horse for uncounted generations. The Lusitano is closely related to the Andalusian horse – they were actually considered the same breed until the 1960s! Both are descendants of the horses that roamed the Iberian Peninsula as far back as 20-30,000 BC. The main points of difference between the two breeds are the Lusitano’s more convex head profile, lower-set tail and more sloped croup. Like Andalusians, Lusitanos are powerful, elegant, strong, agile, willing and intelligent. You can get to know this breed on our rides in Portugal: Costa Azul, Kingdom of the Lusitano and Alentejo Coast. 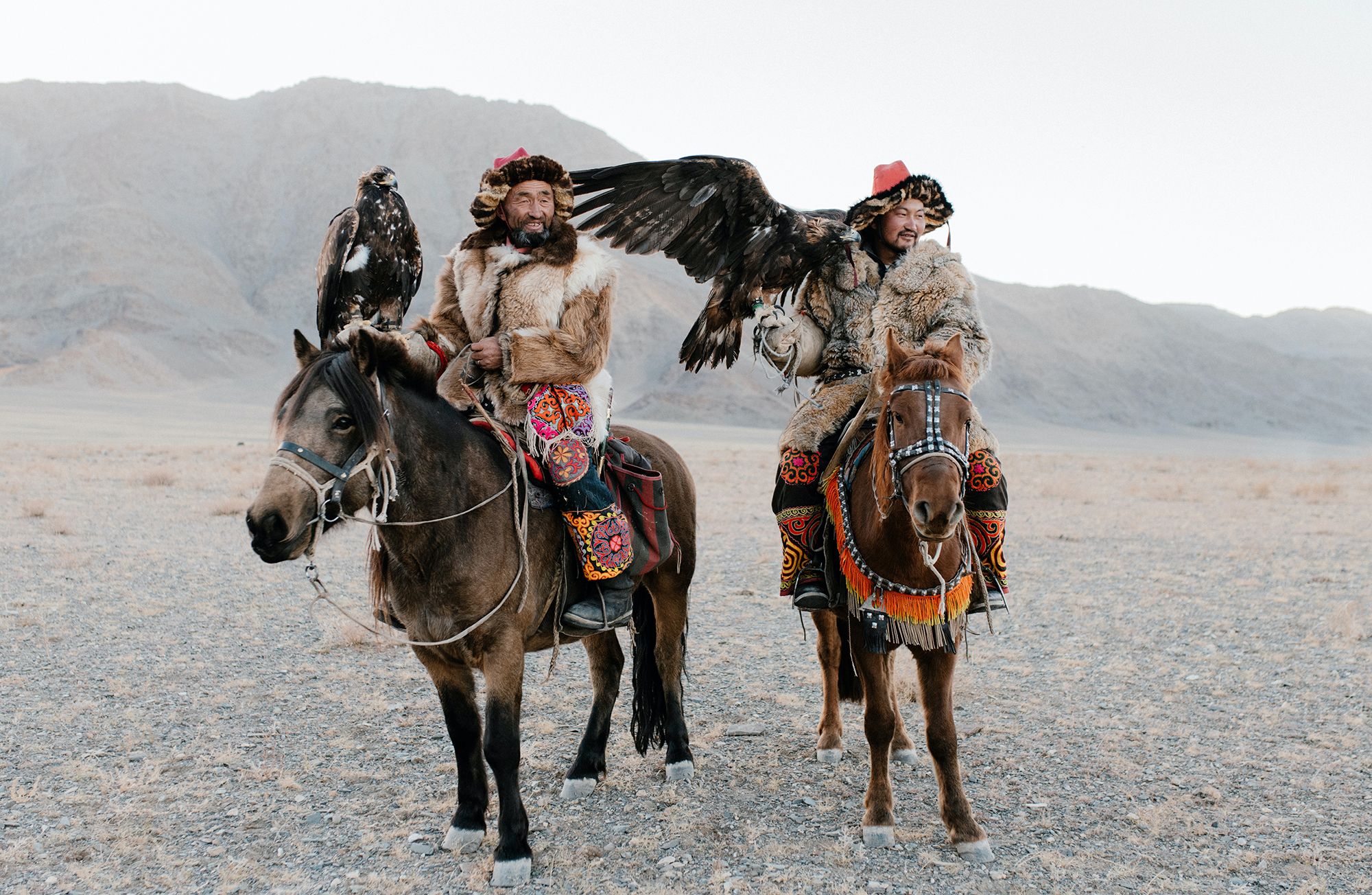 Mongol horse
The Mongol horse is possibly the oldest breed of horse in existence. Still roaming the grasslands on which their ancestors evolved from Equus ferus into the modern horse, they equal the human population in Mongolia and are vital to the nation’s traditional nomadic way of life. Mongol horses’ hardiness and stamina puts all other breeds to shame and makes our horses back at home look like pampered old softies. They just keep going! These are the horses on which Genghis Khan’s armies conquered half of the known world, and after a day’s riding, you’ll see why – you’ll be lucky if your plucky Mongol horse even breaks a sweat. And all of this from horses that stand between 12 and 14 hands high! To ride a Mongolian horse in Mongolia is a bucket list item – tick it off with our Khovsgol and Arhangay rides.

Mustang
Ever wanted to ride America’s wild horses? On our ride in Shell, Wyoming you can do just that. The ranch boasts a hefty quota of Mustangs within its herd of guest horses, as well as paints and Quarter Horses. With their wild ancestry and ancient colonial bloodlines, Mustangs are tough as old boots, yet also sensitive, intelligent and willing. Their characteristics vary from herd to herd depending on their ancestry and the environment in which they roam, but they are typically 14-15 hands high, with a well-proportioned, light yet muscular build. To sit astride these horses is an utter privilege: their history is palpable and they are a joy to ride.

Quarter Horse
Quarter Horses seem to be on their way to world domination in many disciplines thanks to their strength, agility, intelligence and willing nature. Especially popular as working horses on farms, stations and ranches, they’re used in a number of Globetrotting rides including the Shell, Wyoming ride and the Big Horn Cattle Drive in the USA, The Rainbow Beach, Bush & Cattle Ride in Australia, the Pantanal ride in Brazil and many more. You can’t help but be impressed by Quarter Horses’ innate cow sense, which is so strong that they need very little direction from their rider in order to get the job done, whether it be cutting a beast from the herd or mustering. But whether you’re working cattle, trekking over mountains, campdrafting or just enjoying the view between two ears, your Quarter Horse will never fail to impress. 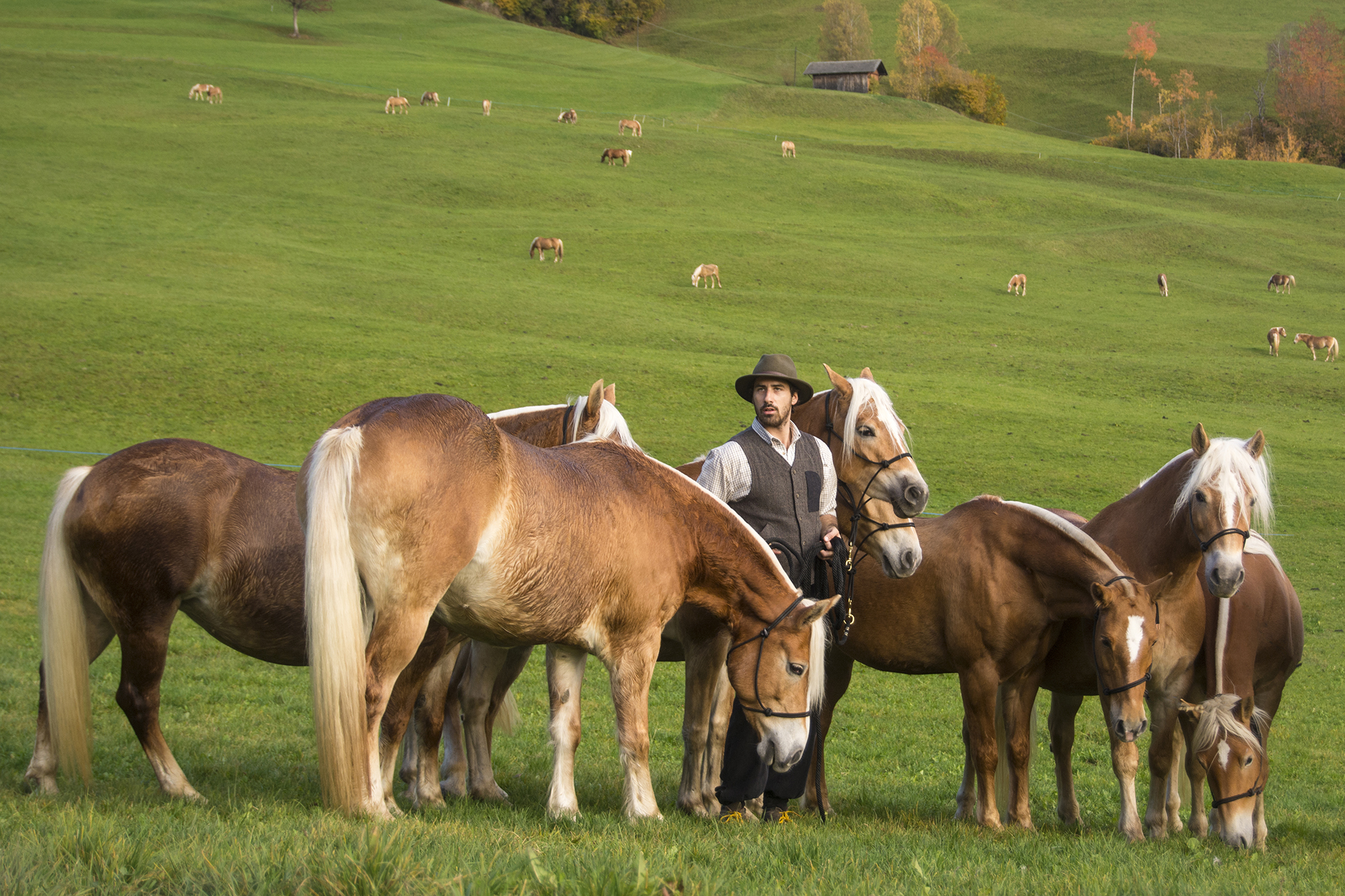 Haflinger
Famed for their flaxen chestnut colouring, Haflingers are beautiful yet tough mountain horses from the alps of Austria and northern Italy – and you can ride them in their Italian homeland on our holiday in the Dolomites! But Haflingers are not just a pretty face. Their friendly, people-pleasing nature is an official breed standard, so they make ideal tour guides, carrying their riders happily across the mountains with their ground-covering paces. Standing between 13.3 and 15.1 hands high, Haflingers can carry surprisingly heavy loads thanks to their solid bone, athleticism and impressive stamina. Fun fact: the first horse to be cloned was a Haflinger filly called Prometea!

Irish Sport Horse
The Irish Sport Horse is a cross between the sturdy, big-boned Irish Draught with either the nimble Thoroughbred or the versatile warmblood. The resulting horse is the perfect athlete: strong, fast, intelligent and remarkably sound, with a sensible, honest disposition. Irish Sport Horses are frequently seen competing at the highest level in show jumping and eventing, yet thanks to their docile nature, they are just as happy trit-trotting through the countryside, teaching novice equestrians to ride or jump, or flying over a cross country course. And they do all three of these things on our rides in Ireland: the Castle & Estate Ride and Cross Country in Tipperary, and our rides in Scotland: the Scottish Borders Ride and the Thirlestane Castle Ride.

So there you have it – some of the breeds you are most likely to encounter on our horse riding holidays! We hope you’re feeling inspired to discover more of the world from the back of a horse, whether it be a stocky Icelandic horse or an elegant Lusitano.
What’s your favourite breed to ride? Let us know in the comments!